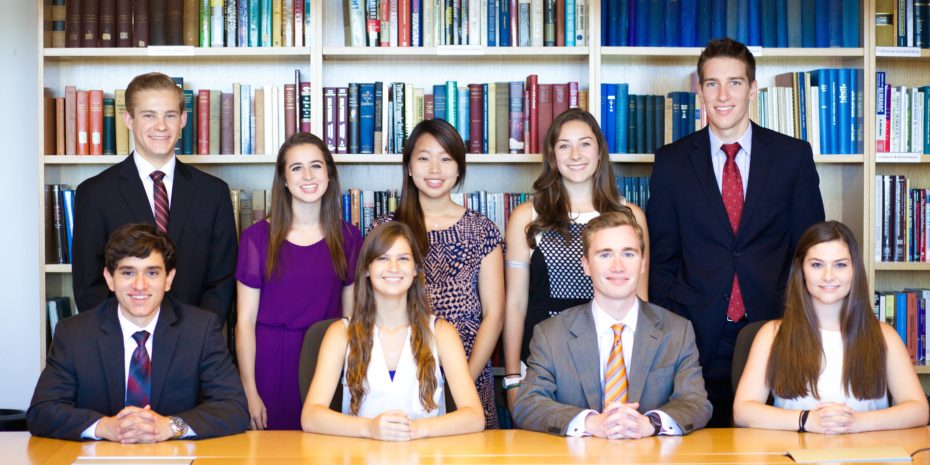 Out of a competitive and extremely talented applicant pool of approximately 100 students, the Rose Institute has selected 10 for its 2014 New Hire Class. They bring a diverse skill set to the Rose, with experience in campaigns, public defenders offices, and journalism. Whether on CMC’s campus or in their respective high schools, they have found themselves heavily involved in activities ranging from campus politics to competitive debate. While some play sports such as lacrosse, others prefer to spend their weekends riding motorcycles, and some simply choose to root for their football team on Sundays. According to Student Manager Ian O’Grady ’15, “This was an incredibly grueling application process, and both David and I were blown away by the quality of every student’s application, from the initial application through final round interviews.”

The Rose Institute looks forward to the contributions this year’s New Hire Class will make in the coming years. Below are their biographies:

Harry Arnold ’17: Harry Arnold is a sophomore hailing from Birmingham, Alabama, majoring in Government. Although he is a proud Southerner and has enjoyed his time in the land of Dixie, he is first and foremost a native Texan, and plans to return to the Lone Star State for law school after graduating from CMC. On campus, he is the managing editor of the Claremont Independent and works as a political engagement coordinator at the Center for Civic Engagement. At the Rose, he hopes to work on projects focusing on the electoral process and redistricting analysis.

Lanie Corrigan ’17: Lanie Corrigan, a Portland, Oregon native, is a sophomore Government major at CMC. At the Rose, Lanie hopes to conduct criminal justice and legal research. She would like to continue to expand her understanding of the legal system and its effects, which she began to develop while working at a Portland public defender’s office. On campus, Lanie also works as a Lead Consultant with SOURCE Nonprofit Consulting, and plays violin in the Claremont Concert Orchestra.

Grace Lee ’17: Grace Lee is a sophomore from Buena Park, California intending to major in Philosophy, Politics, and Economics. She founded Eunoia EduQuest, an educational organization working with local high school students of Pomona and Ontario with the mission to address the opportunity gap. Grace is passionate about community engagement and enjoys being involved in local campaigns. She envisions a career in public policy, addressing issues such as education and poverty. In her spare time, Grace enjoys reading C.S. Lewis and spending quality time with friends over meals at Scripps College.

Josh Rooney ’17: Josh Rooney is a sophomore from Memphis, Tennessee interested in double majoring in Economics and Eastern European Studies. While at the Rose Institute, he plans to work on a wide range of projects analyzing fiscal and public policy data. On campus, Josh is also actively involved with CMC’s Army ROTC program, competes as part of the Claremont Colleges Debate Union, and writes for the Claremont Law Journal. In rare moments of down time, Josh enjoys playing basketball, reading whatever he can get his hands on relating to government or economics, and talking with his little siblings back home.

Wesley Edwards ’18: Wesley Edwards is a freshman from Denver, Colorado, intending to major in Philosophy, Politics and Economics or International Relations. His interest in local government was discovered during his time working as the Co-Editor-In-Chief of his high school news organization. While not on campus, he is also an amateur photographer and enjoys traveling on his motorcycle.

Katie Hill ’18: Katie is a freshman at CMC from the greater Seattle area who hopes to major in Philosophy, Politics, and Economics. Throughout high school she represented classmates in student government, worked on local campaigns, and was a member of her school’s Junior Statesmen of America chapter. Katie looks forward to exploring many different projects while working at the Rose Institute. Outside of the Rose and classes, she can be found playing for the CMS lacrosse team and rooting for her hometown ‘Hawks.

Brian Landeros ’18: Brian is a freshman at CMC from Phoenix, Arizona, majoring in Science & Management. In high school, he was involved with a variety of clubs and played for the varsity football and baseball teams. Prior to working at the Rose, he served as a fellow for the Fred Duval for Governor of Arizona campaign. You can find him speeding around campus on his longboard, jamming out to Chillstep during long study sessions, or getting never-ending seconds at Collins Dining Hall.

Melissa Muller ’18: Melissa Muller is a freshman from Pleasanton, California, interested in studying Government. She found her love of public policy by competing on her high school competitive civics team and is thrilled to be working with the Rose Institute this year. Projects at the Rose that interest her include the Kosmont-Rose Institute Cost of Doing Business Survey, Three Strikes, Crime Funnels, and the Primary Election Project. In her free time, find her practicing her German, playing tennis, and scoping out restaurants around Claremont.

Shivani Pandya ’18: Shivani Pandya is a freshman from Sugar Land, Texas, considering a dual-major in Government and Economics. Her interest in government and public policy grew significantly after interning for a mayoral reelection campaign. Following CMC, Shivani enjoys watching her beloved Packers win, reading books about World War II, and watching anything created by Joss Whedon.

Caroline Peck ’18: Caroline Peck is a freshman from Carlsbad, California, interested in studying Government at CMC. At the Rose Institute, she hopes to research public policy and analyze electoral data. On campus she is involved in the Associated Students of Claremont McKenna College Senate, and when she is not studying, Caroline is watching her favorite movies and making mac and cheese.