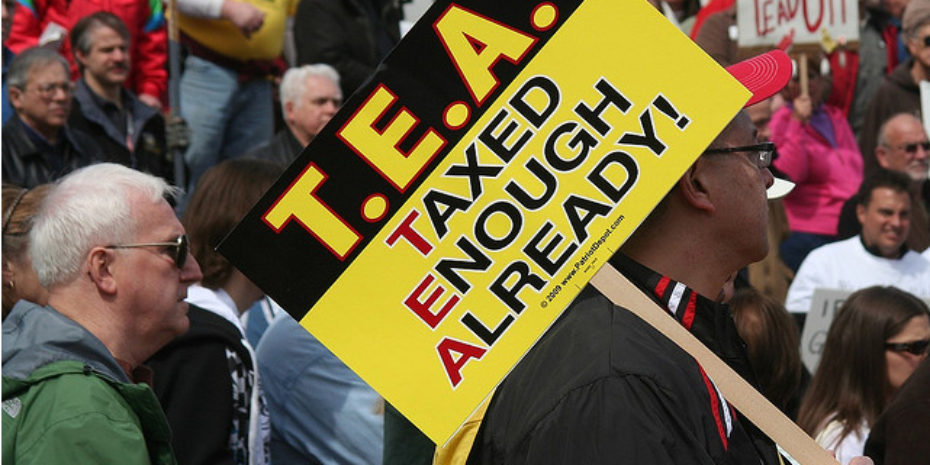 The “tea party” movement has gained momentum throughout the 2010 election season, fueled by economic unrest and the belief that government has become too big, expensive, elitist, and unaccountable. Candidates who embrace tea party principles have won stunning victories in Republican primaries in several states, and tea party energy has contributed to the “wave” that is expected to unseat many more incumbents in November.

In an area with a long history of ousting incumbents, it should not have been a surprise that San Bernardino County’s high desert region generated California’s only tea party victory in the 2010 Republican primaries. As the region’s weekly tea party meetings slowly grew from a handful of activists to mass meetings of 200 or more, Donnelly quietly worked to build his support in the race for the 59th Assembly seat. Yet his candidacy was largely ignored by the Republican Party, which focused its attention in the campaign on the three more traditional, establishment candidates: Chris Lancaster (son of former Assemblyman Bill Lancaster), businessman Anthony Riley, and Claremont Councilmember Corey Calaycay.

The perceived three-way race created the opportunity for a tea party surprise. When primary ballots were cast, the establishment candidates Lancaster, Riley, and Calaycay split 60 percent of the vote. But Donnelly’s 12,449 votes were enough to win—with the support of only 30.3 percent of the district’s Republican primary electorate.

After the primary, Donnelly secured the support of his former Republican opponents. At a fundraiser hosted by Lancaster, Donnelly and Lancaster expressed similar conservative values. However, Donnelly claimed that he won the primary election because he knows how to step outside the establishment boundaries and defend the people. “I speak my mind,” Donnelly told the San Gabriel Valley Tribune. “I really don’t care who I offend, in terms of fighting for what is right—getting insane regulations out of the way of business, returning to a path of growth, scaling back our spending drastically.”

Donnelly, 44, is a native of Georgia who later moved to California where he graduated from U.C. Irvine. He is a small businessman who became an activist through his work with the controversial Minuteman movement. The Minutemen were formed in 2005 to monitor and combat illegal immigration at the United States-Mexico border, and to advocate for stricter border enforcement. That year, Donnelly formed a Minuteman chapter in California and lived for a month along the United States-Mexico border to protest what he believed to be negligent border security. His experience with the Minutemen earned him recognition and a leadership role within the tea party group.

An intriguing question is whether Donnelly is too far to the right for the 59th Assembly District. As also happened in Delaware, Arizona, and Kentucky, the victory of a relatively extreme tea party Republican launched speculation that the Democratic candidate might have a chance at victory even in the heavily-Republican 59th Assembly District. The district, which connects the foothill communities of eastern Los Angeles and San Bernardino Counties then stretches into the high desert, has long been safe Republican territory. Currently, 43 percent of the district’s voters are registered Republican, compared to 35 percent Democratic, and 22 percent decline to state. But while the district is solidly conservative and Republican, it is not monolithically so. San Bernardino County Democrats are still celebrating their recent surge in voter registrations (which gave Democrats a 39.3 percent to 38.3 percent edge countywide), and President Obama defeated John McCain in the County by a margin of 52.1 percent to 45.8 percent in 2008. In the 59th District, McCain defeated Obama by less than five points—51.4 percent to 46.6 percent.

The fate of the district’s incumbent, Anthony Adams (R-Hesperia), highlights the district’s conservative orientation. Adams, a conventional conservative and political insider, won by a comfortable 51 percent to 41 percent margin over his Democratic opponent in 2008, but became vulnerable to attacks from the right when he supported a state budget compromise that included tax hikes. Adams had previously pledged not to support tax increases and he paid a price for breaking this pledge. Talk radio hosts and other activists derided Adams for departing from conservative orthodoxy and formed a drive to recall him from office. Although Adams barely avoided a recall election in 2009, he decided not to seek reelection in 2010—thus opening the door for Donnelly’s insurgent campaign.

In the November General Election, Donnelly will face Democrat Darcel Woods. A Pomona native, Woods is a community college professor and former Los Angeles County Sheriff’s Deputy. Woods has attacked Donnelly’s fitness for the office. She has seized on a media report that that Donnelly has voted in only 13 of the last 30 elections. “He’s touting himself as a patriot, as…someone who is concerned about his country and his state,” she told the Inland Valley Daily Bulletin. “If that’s the case, why wouldn’t he have been taking an active part and been actively participating in voting? Patriots are active in the process of making decisions.”

It is unlikely that Donnelly’s uneven voting history will harm his candidacy in a year when populist outsiders are thriving. The more salient question is whether a candidate with Donnelly’s activist background and political views will win election in a district that is solidly, but not overwhelmingly, conservative. As noted above, the San Bernardino County portion of the district has a long history of electing outsiders and rebels. Those factors, combined with the heavily Republican tilt of independent voters and the much higher motivation levels among Republicans in 2010, make it a safe bet that Donnelly will prevail. If so, the Inland Empire will have contributed to a national phenomenon by sending a tea party representative to the California Legislature.