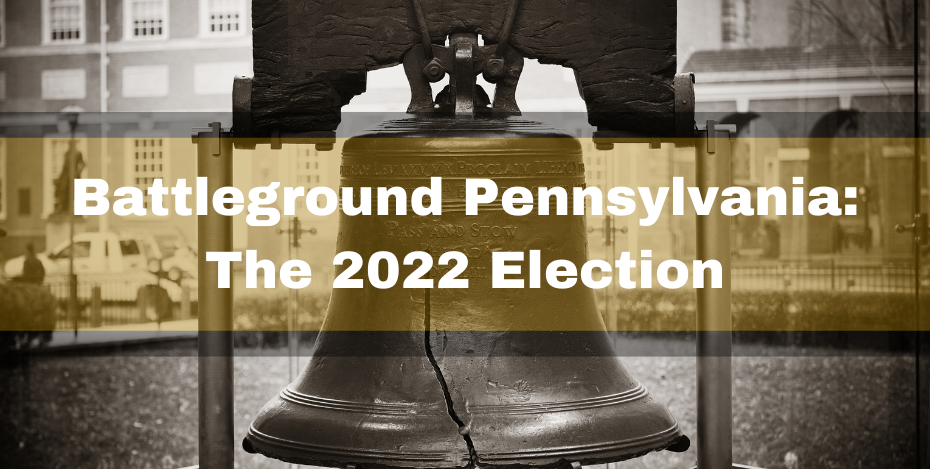 This CMC-Rose Institute Poll presents pre-election preferences in Pennsylvania’s U.S. Senate and gubernatorial races, as well as related topics.  It is based on interviews with a representative sample of 850 Pennsylvania likely voters, conducted online by YouGov between October 11-26, 2022.  Nearly all interviews were completed before the highly publicized Fetterman-Oz Senate debate on October 25, 2022. Our results, including additional responses about the candidates, provide information to help assess how the debate will influence the race. Reported results use survey weights created by YouGov and have a margin of error of ±4.

As with most pre-debate surveys, our poll shows Democrat John Fetterman leading the Republican candidate, Dr. Mehmet Oz, in the Senate race. Our poll has Fetterman ahead 48.1-42.4%, with 9.4% declining to select either candidate.

The results contain clues for potential post-debate changes in the race. Before the debate, 93% of Democratic-identifying or leaning voters supported Fetterman (with 5% of Democrats undecided), whereas only 82% of Republican-identifying or leaning voters selected Oz.  Among Republicans, 11% were undecided or supported neither candidate, with the remainder intending to cross over to Fetterman. The debate performances, news coverage, or other campaign events may encourage straying Republican voters to return to their party’s candidate. Meanwhile, consistent with nearly all other publicly available polling in Pennsylvania, our poll shows Democratic Attorney General Josh Shapiro leading Republican State Senator Doug Mastriano in the race for governor.  In our poll, Shapiro is ahead 53.1-38.1%, with 8.7% selecting neither candidate. In a time of polarization, it should come as no surprise that four-in-five respondents to our Pennsylvania survey plan to vote consistently along party lines—that is, either for Democrats Shapiro and Fetterman or for Republicans Mastriano and Oz.

Yet, because Pennsylvania is closely divided between the two parties, attitudes about the candidates’ personal qualities can mean the difference between victory and defeat.  To learn more about these attitudes, we asked respondents to agree or disagree with four statements regarding the candidates, presented in a random order to avoid systematic influences of one statement on the responses of the others.

The responses provide three important takeaways.  First: core partisans consistently agree with positive statements about their candidate and disagree with positive statements about the opponent.  Second: Fetterman did better than Oz on “populist” themes—that is, identifying with ordinary Pennsylvanians and taking on economic and intellectual elites. Third: at least before the debate, respondents did not express unusually deep concern about Fetterman’s competence.

Many voters believe that the very fate of the nation’s system of government is at stake in this year’s midterm elections.
To examine these beliefs, we asked voters in Pennsylvania: “Which of the following political figures represents a threat to
American democracy?”

In a negatively polarized environment where 87% of Democrats view Donald Trump—still the top-polling Republican candidate—
as a threat to democracy and 80% of Republicans similarly view Joe Biden, many voters clearly believe the other party is unacceptable.  Under these circumstances, it is difficult to convince voters to consider voting across party lines and campaigns can make only a limited difference.  If Fetterman wins the Pennsylvania Senate race despite his poor debate performance, he likely can thank this feature of contemporary American politics. The CMC-Rose Institute Poll’s Pennsylvania results are largely consistent with other polls conducted at the same time.
The New York Times/Siena poll from Oct. 24-26 had Fetterman at 49% and Oz at 44%.[1]  The public YouGov/CBS News poll from Oct. 21-24 was a bit closer, with Fetterman at 51% and Oz at 49%.[2]  The handful of post-debate polls currently available have tended to give Oz the advantage in the race.  Less than one week remains before the election, but in a dramatic and dynamic
contest, the ground may shift again.

These results are part of a larger survey project conducted by the CMC-Rose Institute Poll during the 2022 election cycle.  More results can be found at www.roseinstitute.org.

Founded in 1973 at Claremont McKenna College, the Rose Institute is one of the nation’s leading academic centers focused on the study of state and local government. For more information, visit www.roseinstitute.org.