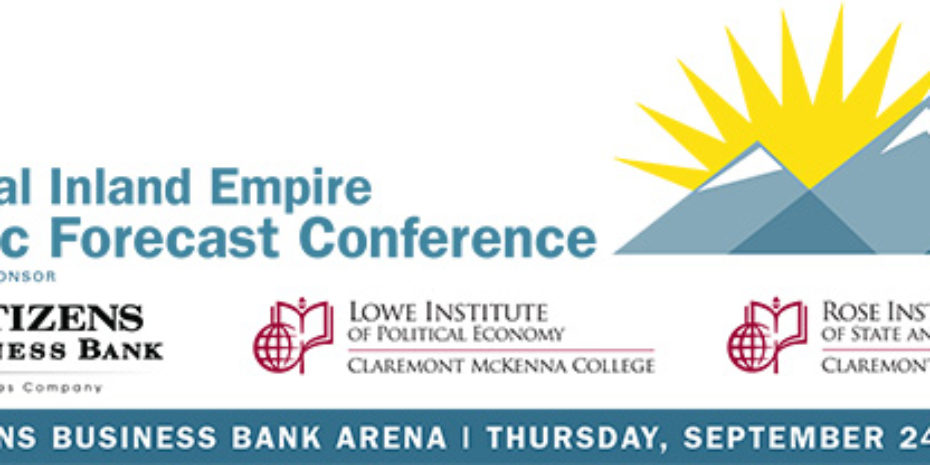 Tickets are now available for the Sixth Annual Inland Empire Economic Forecast Conference on Thursday, September 24, 2015 from 7:00 am to 10:15 am at Citizens Business Bank Arena, located at 4000 East Ontario Center Parkway, Ontario. The sixth annual conference is presented by Citizens Business Bank and hosted by the Inland Empire Center for Economics and Public Policy at Claremont McKenna College (CMC), a joint venture between the Lowe Institute of Political Economy and the Rose Institute of State and Local Government of CMC, and the UCLA Anderson Forecast.

A select number of media and sponsorship opportunities are available; for more information, contact Marionette Moore at 909-607-7572.

Attendees can look forward to hearing what Melissa Francis, the conference’s featured guest speaker, has to say about the economy from her national perspective. In addition to being an anchor and host on the Fox Business Network and Fox News Channel, she is a regular contributor on financial, economic, and political issues on shows such as The O’Reilly Factor, The Five, 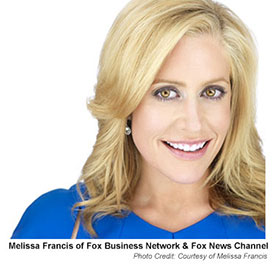 Outnumbered, and The Kelly File.

Conference Schedule:
7:00 am: Registration, Breakfast and Networking
8:00 am to 10:15 am: Conference

UCLA Anderson Forecast Senior Economist, Jerry Nickelsburg, will present the national and California forecasts. Marc D. Weidenmier, Robert J. Lowe Professor of Economics and the George Roberts Faculty Research Fellow at the Robert Day School of Economics and Finance at Claremont McKenna College, Research Associate at NBER, and the Director of Lowe Institute of Political Economy, will deliver economic forecasts and economic development updates on the Inland Empire including San Bernardino and Riverside Counties. Andrew Busch, Crown Professor of Government, George R. Roberts Fellow, and Director of the Rose Institute of State and Local Government at Claremont McKenna College, notes “The Inland Empire Center is excited about this opportunity to discuss the vital issues facing the economy in the Inland Empire and beyond. This is the sixth year of the conference, and it is going to be better than ever.” Presenting Sponsor: Citizens Business Bank. Platinum Sponsor: Oremor Automotive Group. Gold Sponsor: Los Angeles Business Journal. Silver Sponsors: Citrus Valley Association of Realtors and Parke Guptill and Company, LLP.

Shares of CVB Financial Corp. common stock are listed on the NASDAQ under the ticker symbol “CVBF.” For investor information on CVB Financial Corp., visit our Citizens Business Bank website at www.cbbank.com and click on the “Investors” tab.

Claremont McKenna College (CMC) is a highly selective, independent liberal arts college with a unique real world mission. As a member of The Claremont Colleges, CMC’s dynamic programs and eminent teacher-scholars develop students into leaders in the private, public, and social sectors. Located on a beautiful residential campus east of Los Angeles, the College offers generous scholarship and financial aid, and rigorous, broad academic training in the social sciences, sciences, and the humanities, with a widely recognized expertise in economics and government. The college achieves its distinctive mission of producing responsible leaders by providing a community ethos that is committed to collaboration and the free exchange of ideas, nationally recognized athletic programs, and rich opportunities for advanced research, real world experience, and internships through student-led enterprises and 11 research institutes.

UCLA Anderson Forecast is one of the most widely watched and often-cited economic outlooks for California and the nation and was unique in predicting both the seriousness of the early-1990s downturn in California and the strength of the state’s rebound since 1993. More recently, the Forecast was credited as the first major U.S. economic forecasting group to declare the recession of 2001. www.uclaforecast.com.

For more information from The Press Enterprise, click here.

← Written-In Fiction: The Myth of the Write-In Vote in California and Beyond
Rose Institute Research Assistant Hannah Oh ’16 Writes Op-Ed for The New York Times →