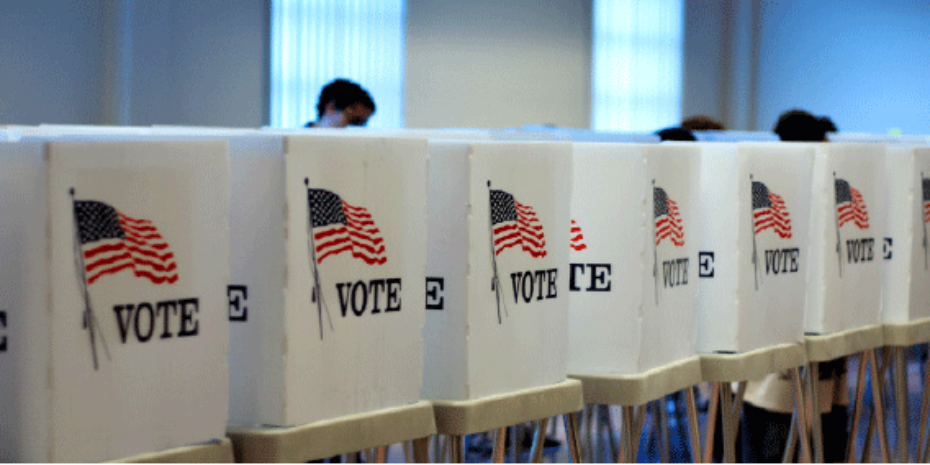 In the Inland Empire, 2010 is shaping up to be an unusually competitive year for state legislative elections. Due to term limits and resignations, several of these elections have no incumbent on the ballot. A changing electorate and a difficult economic climate also bring new dynamics to the races. The election season kicked off with an April 13 Special Election to replace former State Senator (now Supervisor) John Benoit in Riverside County’s Senate District 37. Republicans Bill Emmerson and Russ Bogh combined to spend over $1 million and outside groups including tribes and unions collectively spent at least $1 million more on this hotly contested race. After a contentious campaign, Emmerson outpolled Bogh and will now advance to a June run-off. The June Primary in Assembly District 59, which spans San Bernardino and Los Angeles Counties, is also expected to be highly competitive. Assembly District 36, also shared between Los Angeles and San Bernardino Counties, saw a surprisingly close 2008 election. The Democratic Party hopes to make it competitive again this November.

California’s State Senate District 37 encompasses most of Riverside County, including the Coachella Valley. The district starts in Norco and Corona, swings south to include Lake Elsinore and Perris, north to Moreno Valley, eastward through Hemet, San Jacinto, Calimesa, Beaumont, and Banning, and then continues into the Coachella Valley cities of Desert Hot Springs, Palm Springs, Rancho Mirage, Palm Desert, Indian Wells, and La Quinta. To the East, it extends all the way to the Arizona border. The district’s population in the 2000 Census was approximately 8 percent African American and 31 percent Latino. According to Secretary of State’s most recent Statement of Registration, the district has 462,132 registered voters—37 percent are registered Democrats and 41 percent are registered Republicans, 17 percent are decline to state and 5 percent are registered with minor parties.  Latino voter registration has increased by 4 percentage points since 2007, and is now 23 percent, according to the California Target Book. 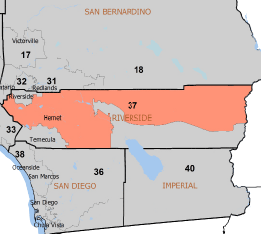 After John Benoit resigned in November 2009 to become a Riverside County Supervisor, candidates scrambled to prepare for the special election. The first Republican to declare his candidacy was Assemblyman Bill Emmerson (AD-63). Emmerson’s Assembly District is in San Bernardino County and he faced charges that he was running as a carpetbagger in the Riverside County Senate District. (Emmerson switched his voter registration from Redlands to Hemet shortly after Benoit was appointed to the Riverside Board of Supervisors.)   Emmerson’s leading opponent was former Assemblyman Russ Bogh. Bogh had lost to Benoit in the 2008 GOP primary. This time, Emmerson defeated Bogh by a 42-22 percent margin. On the Democratic side, Justin Blake, a member of the Palm Springs USD Board of Education, emerged as the leading candidate with 14 percent of the vote. Emmerson, Blake, and American Independent candidate Matt Monica now advance to the run-off.

Although the district leans Republican, it is not a completely safe for the GOP. President Barack Obama won this district by 2 percentage points in 2008. Democrats also have a plurality in some key cities in the district. Of Moreno Valley’s 64,114 registered voters, 49 percent (31,425) are registered Democrats compared to the 29 percent (18,733) registered Republicans. In Palm Springs Democrats are 49 percent (11,037) of the district’s voters, while Republicans are 31 percent (6,956). Nevertheless, Emmerson is favored to win the run-off.

The 36th Assembly District joins the Los Angeles County cities of Lancaster and Palmdale with the San Bernardino County cities of Adelanto and Victorville. The district’s population is approximately 52 percent white, 30 percent Latino, 12 percent African American, and 3 percent Asian. Latino voter registration increased by 5 percent to 25 percent between 2007 and 2009.

Although this district has been controlled by the GOP since its creation in the 2001 redistricting, the 2008 General Election saw a surprisingly close race. In 2008, Republican Stephen Knight beat Democrat Linda Jones, 52 percent-48 percent. Although Knight’s campaign believes the close call was due to its minimum effort, Jones garnered a large percentage of the vote despite spending less than $50,000.

Three Democrats will be on the primary ballot. Linda Jones has filed again, as has her competitor in the last Democratic Primary, Maggie Campbell, who lost to Jones 80 percent-20 percent last time. The new candidate is Shawntrice Watkins, an LAPD officer.

California’s State Assembly District 59 is split almost exactly in two between 123,000 registered voters in San Bernardino County and 127,000 registered voters in Los Angeles County. In Los Angeles County, the district includes the cities of Bradbury, Claremont, Glendora, Hesperia, La Verne, Sierra Madre, a small portion of Arcadia, and most of Monrovia, San Dimas, La Crescenta-Montrose, and the Angeles National Forest. In San Bernardino County, the district includes the town of Apple Valley and the City of Hesperia, as well as a portion of Highland, a small portion of the city of San Bernardino, and the San Bernardino National Forest, including Lake Arrowhead and Crestline. The district’s population in the 2000 Census was 65 percent Caucasian, 5 percent African American, and 21 percent Latino. As of January 2010, the district has 249,810 registered voters, 35 percent of which are registered Democrats and 43 percent are registered Republicans. In the 59th Assembly District McCain outpolled Obama in the 2008 Presidential Election 51 percent to 47 percent.

Conservative activists attempted to recall the incumbent, Anthony Adams (R-Hesperia), following his vote for the budget bill in 2009, but they failed to qualify the recall for the ballot. Following the recall controversy, Assemblyman Adams decided not to seek reelection. Five Republicans have entered the race for the GOP Primary. Ken Hunter, Michael Rogers, Corey Calaycay, and Chris Lancaster, Anthony Riley, Iver Bye, and Tim M. Donnelly have all submitted Statements of Intention. In the 2006 Republican primary, Christopher Lancaster lost to Adams despite spending nearly $200,000, $100,000 of which was his own money. Nevertheless, Adams won by a nearly two-to-one margin, 5,584 votes for Lancaster and 10,997 for Adams. As of March 24, 2010, Lancaster had spent $56,111 on the 2010 election and still has $70,513 cash on hand. The other Republican candidate to have reported funds is Claremont City Councilmember Calaycay, who spent $18,681 by March 24 and has $54,416 cash on hand.

Although this district has traditionally been fairly safe for Republicans, GOP registration has decreased by 5 percent since 2002, from 48 percent to 43 percent. Yet Republicans maintain an 8 percent advantage over Democratic registration. AD 59 promises to be one of the most competitive June primaries in the state, but is expected to stay safely Republican in November.

The 32nd Senate District consists of cities in San Bernardino County plus Pomona in Los Angeles County. It includes Montclair, Ontario, Fontana, Rialto, Bloomington, Muscoy, 80 percent of the city of San Bernardino and 89 percent of the city of Colton. In the 2000 Census, the district was 59 percent Latino, 12 percent African American, and 4 percent Asian. Since 2007, Latino voter registration in this district has increased by 8 percent, reaching 48 percent in 2009. The overall voter registration also increased from 289,860 total voters in 2006 to 302,105 total in 2009. Registered Democrats increased from 48 percent to 51 percent in January 2010, while registered Republicans decreased from 33 percent to 27 percent.

The Democrat Gloria Negrete McLeod ran unopposed in the 2006 General Election for this seat, and if she wins this year, she will not be termed out until 2014. McLeod was first elected to the Assembly in 2000 and termed out in 2006, when she won this Senate seat. For this upcoming election, McLeod has a huge war chest, with over $943,000 cash on hand. Compared to Senate District 37 and Assembly Districts 36 and 59, Senate District 32 will be quiet this election year. With this large sum at her disposal, however, McLeod is rumored to be running against San Bernardino County Supervisor Gary Ovitt next year. She denies any such plans.

← Agua Caliente Seeks to Diversify
Utah Redistricting: No Reform for 2011 →