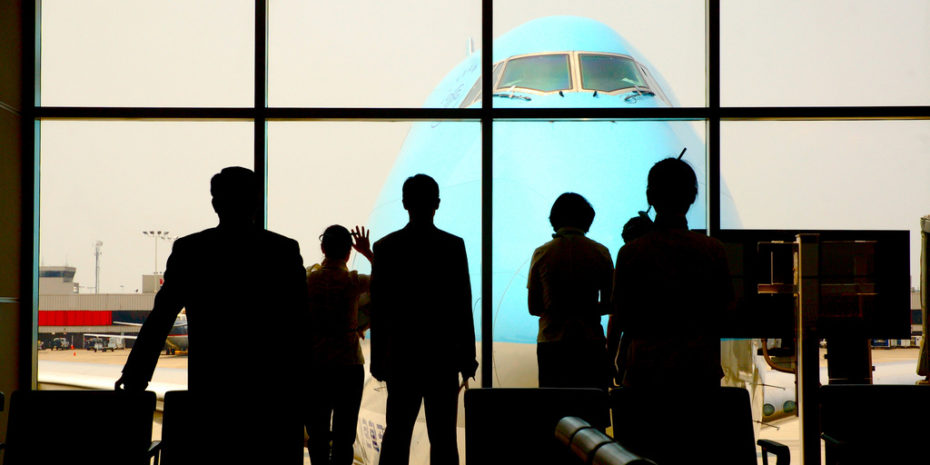 The Ontario International Airport Authority (OIAA) was formed in 2012, the result of a Joint Powers Agreement between San Bernardino County and the City of Ontario. Since its formation, its principal task has been to negotiate the transfer of control from Los Angeles World Airports (LAWA) back to Ontario, a goal that is now very close to being realized. The Rose Institute recently interviewed the five members of the OIAA board, touching topics as varied as the growth plan for the airport, the regional impacts of the transfer, and the future relationship between LAWA and Ontario Airport.

Alan Wapner is currently the president of the OIAA. He has served for 20 years on the Ontario City Council, during which he has worked on a variety of projects, including the Ontario Mills Mall, the Ontario Convention Center, the Ontario Police Station, and the Citizens Business Bank Arena. He continues to be active on a series of regional boards, the most recent count has him serving on ten. These include the League of California Cities, San Bernardino Associated Governments (SANBAG) Board of Directors, and OmniTrans, where he is the chair.

Ronald Loveridge is the current vice president of the OIAA. He was the mayor of Riverside for nearly 20 years (1994-2012), and served as the president of the National League of Cities in 2010. He has served in a variety of roles on the following organizations: California Air Resources Board, California Forward Action Fund, South Coast Air Quality Management District, and the Inland Empire Economic Partnership, among many others. He is currently the Director of the UCR Center for Sustainable Suburban Development.

Lucy Dunn is the CEO of the Orange County Business Council. A frequent name on the Orange County Register’s “Most Influential List,” she has also won a variety of other awards, including: California State University Fullerton’s “Vision and Visionaries Award” in 2007, Southern California Association of Governments’ “Private Sector Partner of the Year” in 2012, and the Orange Catholic Foundation’s “Business and Ethics Award” in 2014, among many others. She has also served on the California Department of Housing and Community Development as Director and on the California Transportation Commission. 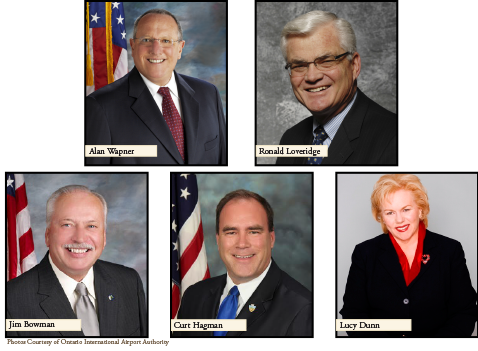 Rose Institute: What is the growth strategy for Ontario over the next 5 to 10 years?

Mr. Loveridge: This is the question before the OIAA. Various plans are in process. Of course, the overall objectives are to increase passengers and cargo and to develop the vacant property around the airport. ONT has the possibility of being one of the most successful regional airports in the country. It is not constrained. Infrastructure is in place. It is located at the center of 19 million people in Southern California.

Rose Institute: How does Ontario intend to attract more airlines to Ontario Airport?

Ms. Dunn: Ontario will attract new and increased air service through (1) reductions in ONT’s future cost per enplanement (CPE), (2) showing how underserved the Ontario market is relative to all other markets of similar size, (3) showing the constraints that the other area airports face, (4) showing the opportunities and growth that the region has to offer and (5) tailored presentations to the carriers and routes that put our best foot forward.

Mr. Loveridge: The simple answer is by increasing flights. The more complicated answer is found in better marketing, reduced fees, direct flights, increased amenities, development around the airport, et cetera. The OIAA also intends to reach out to Inland Southern California to be a participant, a partner in these efforts.

Rose Institute: Are there any changes to transportation policy that are being considered to accommodate a (possible) increase in traffic at ONT?

Mr. Wapner: At this time, no changes to transportation policy are contemplated. In 2015, ONT served approximately 4.2 million passengers. The current facilities can accommodate 10 million annual passengers without major expansion.

Mr. Hagman: Nothing right now, since we have all the freeway arteries near the airport. So at least in terms of SANBAG and the County, we’re probably not looking at a lot of changes. In the long-term, there is the possibility of light-rail with the Gold Line and maybe high-speed rail down the line.

Rose Institute: How can the area around the airport best be developed to benefit Ontario?

Mr. Bowman: The OIAA believes that ONT can become the centerpiece of Southern California’s first Aerotropolis. An Aerotropolis is a new urban form placing airports in the center with cities growing around them, connecting workers, suppliers, executives and goods to the global marketplace. (The Aerotropolis concept was inspired by the research and writing of John D. Kasarda, Director of the Kenan Institute of Private Enterprise at the University of North Carolina’s Kenan-Flagler Business School.) We believe Ontario is ideally suited for the Aerotropolis urban design model due to its strategic location in the regional ground transportation system, the availability of prime property on and off the airport, wide-spread community support and the political will to harness the airport’s enormous potential.

Rose Institute: Ms. Dunn, given your experience and work in Orange County, how do you think ONT being transferred from LAWA is going to affect Orange County, especially John Wayne Airport?

Ms. Dunn: ONT is well positioned to play an integral role in accommodating the growing demand for air travel in Orange County and all of Southern California. ONT is virtually unconstrained whereas John Wayne Airport is capped at 10.8 million annual passengers until 2021. In 2015, John Wayne Airport served nearly 10.2 million passengers. It likely will reach its authorized capacity of 10.8 million annual passengers in 2016 or 2017.

Rose Institute: Going forward, what will the relationship between Ontario Airport and the surrounding cities look like?

Mr. Loveridge: Beginning in March, the new Airport Director Kelly Fredericks will begin an extensive outreach effort to tell the ONT story to surrounding cities. We (OIAA) recognize that ONT is a regional airport. We want ONT to be the airport of choice for cities as well as the residents and the businesses in Inland Southern California.

Rose Institute: How can ONT best serve the people not just of San Bernardino County, but also Riverside County?

Mr. Loveridge: Support for ONT goes well beyond county boundaries. The overarching objective of OIAA is to make ONT the airport of choice for Inland Southern California. The economic benefits of the growth of ONT will be important to both counties.

Rose Institute: Especially given Ontario Airport’s economic importance to the region, how do you expect the relationship between ONT and San Bernardino County or San Bernardino Association of Governments (SANBAG) to develop?

Mr. Hagman: I think that especially Ontario and San Bernardino County work very closely together. What’s good for the city is good for the county, and SANBAG provides infrastructure for cities to grow in the county. We have a collaborative working relationship at the moment.

Rose Institute: What steps is San Bernardino County taking to ensure that ONT becomes a success?

Mr. Hagman: The County is serving as a backup to the City of Ontario. Ontario has the lead to make Ontario Airport successful. We’re looking at the idea of supplementing landing fees costs while development goes on at the airport. What we charge for the rent is the major factor in what airlines come to the airport. There are about 700 plus acres of possible development around the airport, and the revenue would go to the airport to lower landing fees. Until those funds start rolling in, we might use county funds to supplement those landing fees.

Future of the Relationship Between Ontario & Los Angeles World Airports

Rose Institute: What does the future of the relationship between Ontario Airport and LAWA look like?

Mr. Wapner: During the first two years of operation under local control, the OIAA will utilize LAWA’s current employees at ONT to ensure a seamless transition of control and provide uninterrupted services. At the conclusion of the transition period, all services at ONT will be provided by employees of the OIAA or private sector companies under contract to the OIAA. At that point, ONT will be on a level playing field with the other secondary airports in Southern California – operating independently to provide airport capacity to meet the growing demand for air service in the region.

Mr. Loveridge: We reached agreement that met the objectives of ONT and LAX. We will work together in the same way we will work with Bob Hope, John Wayne, and Long Beach. SCAG and others who have studied aviation in Southern California all emphasize the importance of regionalizing airport traffic across this sprawling mega region. Working together includes regionalizing rail traffic to the airports of Southern California.

Mr. Hagman: We’re not necessarily competing with them, but we’re looking to service all residents in the region. Ontario is going to pick up flights as other airports get maximized, but also add different flights. We might expand international flights to Asia and get a lot of connecting flights. We’re focused on working to make the best service possible for the residents in the region.

Reflections on the Process

Rose Institute: What was the most challenging aspect of this entire process?

Mr. Wapner: The most challenging aspect of the process was to convince Los Angeles to embrace the regional consensus that there was an inherent conflict of interest in L.A. controlling an airport in another jurisdiction and that it was in the best interest of all of Southern California for ONT to be under local control.

Rose Institute: Do you think that the City of Ontario should have done anything different throughout this process?

Mr. Bowman: It is difficult to imagine anything different Ontario could have done throughout the process of obtaining ONT since the city’s ultimate goal is now being achieved. As soon as it was determined that Los Angeles had changed its view of ONT as it related to LAX – creating a clear conflict of interest – the only option for Ontario’s leaders was to develop and implement a strategy to return ONT to local control as soon as possible.

Rose Institute: Should cities reexamine their relationship with other cities, especially larger ones, in light of LAWA’s treatment of Ontario?

Mr. Loveridge: The transfer of control is old news. The good news is that a major regional airport is poised to grow. Cities of Inland Southern California need to support, and understand, future directions and initiatives at ONT. This is not the OIAA airport; rather, ONT is the airport for this region and its cities, businesses, and residents. It can be this region’s most important economic driver as well as a resource that distinguishes us as a good place to live and to do business.

Ms. Dunn: Cities should continually assess and work to improve their relationships with other cities. That said, control of ONT by LAWA was a unique situation not likely to be replicated elsewhere in the region. This is because municipalities and other public agencies do not typically own and operate facilities outside their geographic boundaries.

Rose Institute: Mr. Wapner, how has this process compared to other major projects (Ontario Mills, Citizens Business Bank Arena) that you’ve been a part of? What aspects have been more challenging or easier?

Mr. Wapner: All major projects in the City of Ontario involve a collaborative approach with our public and private stakeholders. We implemented this same philosophy when we committed to the local control campaign for Ontario International Airport as reflected in the region’s overwhelming response and support of this initiative. We focused on community engagement, public education, and cooperation. The success of the Ontario Mills Mall, the Citizens Business Bank Arena, the Ontario Convention Center, and many other major Ontario projects was a solid foundation for our team to build upon. 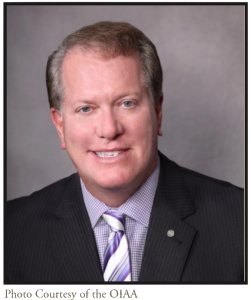