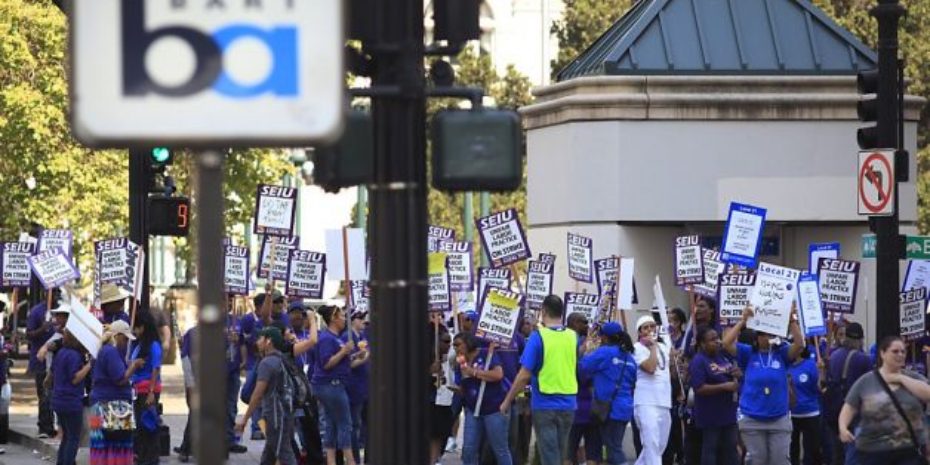 Following 33 hours of negotiations held by federal negotiators, Bay Area Rapid Transit (BART) workers went on strike Friday, October 18, 2013, over pay and work rule changes. Currently, union workers’ average gross pay is $76,500. Although union and management reached agreement on changing worker pension contributions from zero to 4 percent, and increasing monthly health care payments from $92 to $144, the parties remain apart on pay raises. While management has offered an increase of 12 percent over 4 years, the unions are requesting an increase of 15.9 percent. They argue that the additional 3.9 percent is necessary to factor in new contributions for health care and pension costs. Under the management’s plan, workers would make an additional $9,180 while they would make on average $12,150 under the unions’ proposal.

The second part of the dispute, over work rule changes, stems from the past practices clause in union contracts. Changing a past practice requires mutual agreement between management and the union. Management wants to change rules that allow employees to “call in sick, work four days and get paid overtime on the fifth day; employees can leave projects in the middle of a job to go work on something else; and employees can receive paper paycheck stubs instead of electronic notices.” Moreover, If BART increases service for a particular event or holiday, the unions can also force the same service to continue the following year, regardless of necessity. While management argues that these conditions are not the norm and prevents management from making needed technological and service changes, the unions believe that the clause is necessary to prevent management from giving punitive work assignments to employees who have filed workplace complaints and to give employees predictable work schedules.

As both parties continued to argue over issues of pay and contracts, commuters in the Bay Area found alternatives. Plans included increased bus and ferry service, expanded carpool hours, and free-trip buses to San Francisco provided by BART. However, these were not adequate for satisfying demand. Although BART riders make up only 5 percent of Bay Area commuters, their presence on freeways could significantly slow down traffic. The Bay Area Council, a regional business organization, estimated that the strike would result in an approximate $70 million hit daily to the economy.

Update: The strike concluded late at night on Monday, October 21, 2013, though the details of the agreement came out Wednesday. The unions won a 15.4% increase in pay and greater safety measures, including bulletproof glass at 15 station-agent booths and flexible scheduling for agents working late night and early morning hours. BART won the ability to introduce new technology in the workplace and changes to overtime workers, requiring workers without paid sick leave to work 40 hours before being eligible for overtime. An arbitrator will settle various unresolved issues.

← The Consequences of the Government Shutdown on the Housing Market
San Diego PAC Fined $7,500 for Violating Campaign Disclosure Laws →