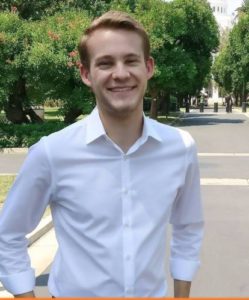 The Rose Institute congratulates Wesley Whitaker ’18 on his selection as a 2018-19 Jesse M. Unruh Assembly Fellow.  Established in 1957, the Assembly Fellowship is one of the nation’s most selective and prestigious government fellowship programs.   Each year, the program selects a group of 18 Assembly Fellows to serve for a year in the California state capitol.  The program’s alumni include leaders in both the public and private sectors—elected officials, judges, legislative staff, CEOs, entrepreneurs, attorneys, and university professors and administrators.

In his four years at the Rose Institute, Wesley distinguished himself as a researcher.  He contributed to many of the Institute’s signature projects, including analyses of criminal justice policy, the Video Voter project on California’s ballot measures, a report on the history of terrorism in California, a major election administration project, and research on politics and policy of Texas and California.

Aside from being a research assistant at the Rose Institute, Wes also served as the Marian Miner Cook Athenaeum Fellow in his senior year at CMC.

Wesley is well prepared for his service as an Assembly Fellow and we wish him the very best.