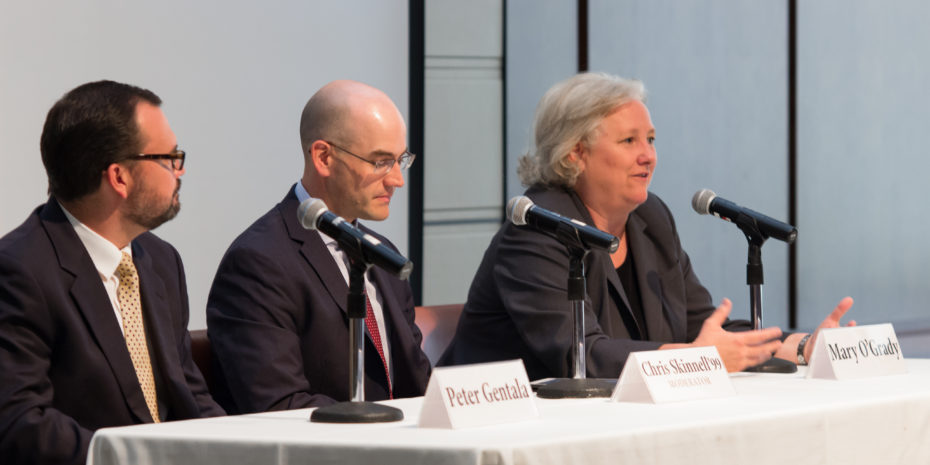 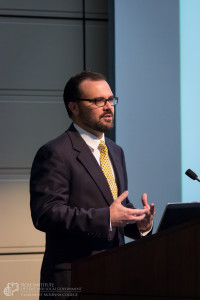 After introductions by Mr. Skinner, Mrs. O’Grady and Mr. Gentala gave a presentation detailing the background of the case, including the history of redistricting in Arizona. This case arises from a challenge brought by the Arizona legislature to a citizen initiative which created an independent redistricting commission, thus transferring the authority for redistricting from the legislature. The constitutional questions before the Court are whether the legislature has standing to bring the case and the meaning of the word “legislature” in the Elections Clause of the US Constitution. Does it refer to the brick and mortar building, or more broadly to the legislative power which may be exercised by voter initiatives?

The issues of standing and legislative power are intertwined. As Mrs. O’Grady noted, lack of a political power is not it itself a cognizable injury, and the courts frequently avoid that issue. As Mr. Gentala noted, however, the problem seems to revolve around a notion of whether the legislature has been divested of a power granted to it in the Elections Clause. Even though the legislature can do other things, and has influence in the process, which Mrs. O’Grady mentioned often, the complete removal of the legislature’s power may not meet constitutional muster. 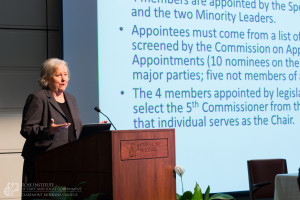 The panel repeatedly returned to the implications for the initiative process. Mrs. O’Grady argued that a ruling in favor of the legislature would prohibit initiatives that affect all federal elections, including issues such as voter identification laws passed by voters. In response, Mr. Gentala drew a distinction between an absolute ban, Mrs. O’Grady’s argument, and a more middle ground predicated on the word “prescribe” in the Elections Clause. These arguments exist as part of a broader debate over the role of the people and to what extent their expressed will is limited by the constitutional provision.

Both Mrs. O’Grady and Mr. Gentala commented on the closeness of the case. While the media reports following oral arguments seemed to imply a win for the legislature, Mr. Gentala emphasized that he felt a 5-4 decision was most likely, going either direction. Unfortunately, both sides will have to wait a while longer to know that outcome. The Court’s decision is expected sometime this summer.

One Response to Redistricting Panel at the Athenaeum