On Thursday, February 5, 2015, the Rose Institute of State and Local Government and the Henry Salvatori Center for the Study of Freedom in the Modern World co-hosted a visit by Michael Barone at Claremont McKenna College. Mr. Barone started his visit with a reception with Rose Institute and Salvatori Center students. He then addressed a packed crowd at the Marian Miner Cook Athenaeum, speaking on the topic of “American Politics 2015: Looking Forward.” 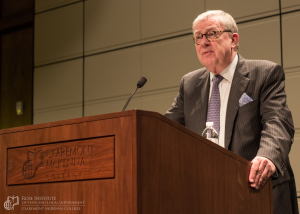 In his Athenaeum address, Barone discussed the history of the two-party system and the likely direction of each party in upcoming elections. He also laid out the challenges that each party faces with divisions along cultural lines. “The Democrats need to assemble their coalitions with a candidate who is in-line with the party’s enthusiasm. The Republicans need to find policies that both reflect the core of the party but are also popular,” said Barone. The talk concluded with Barone responding to student questions.

Barone is the long-time co-authored The Almanac of American Politics. He is also the Senior Political Analyst for the Washington Examiner and a Resident Fellow at the American Enterprise Institute. Barone is also a regular contributor on the Fox News Channel.

The 2014 edition of The Almanac of American Politics focuses on the 2012 election, and explains the implications of the congressional and presidential races on future legislation. The book also covers the changes brought about by the 2010 census and the resulting new districts. Barone is also the author of six other books, including Shaping Our Nation: How Surges of Migration Transformed America and its Politics (2013) and Our First Revolution: The Remarkable British Upheaval That Inspired American’s Founding Fathers (2007).