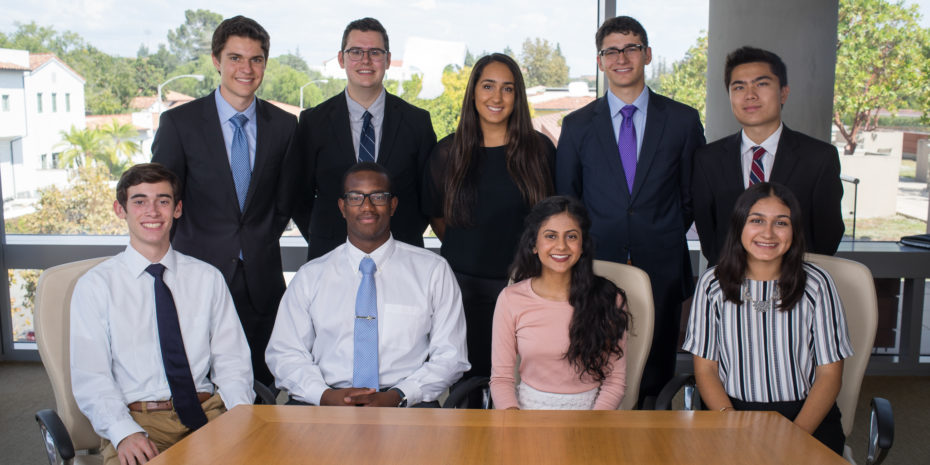 WELCOME THE NEW HIRES FOR 2017

This year eight freshmen and one sophomore were hired as the newest class of Rose Institute research assistants.  New Hire Project Manager Katie Hill’18 has scheduled a series of training aimed to develop their research skills.  The staff and other students at the Rose Institute welcome them!

Elena’s past involvement in Cal YMCA’s Youth and Government program inspired her pursuit of a Government major that led her to Claremont McKenna College.  She was raised in Hawthorne, California where she participated in efforts to improve her community.  Elena volunteered at the local hospital, led voter registration drives, and worked at her neighborhood public library.  On campus, you can find Elena listening to political podcasts, re-watching West Wing episodes, or on Yelp in the search of great food. Through her work at the Rose Institute, she hopes to contribute to efforts that will impact local and state government.

Sevion is from Toronto, Ontario, Canada. Sevion is currently a Government major but is interested in political science and is hoping to major in PPE (Philosophy, Politics, Economics). In high school Sevion was Head Steward, Varsity football Captain, Co-Head of the Black History club and Founder of the Mock Trial Club. Sevion also volunteered through the African Canadian Christian Network (ACCN) providing interview tips to students who aspire to attend private schools in Ontario.

At CMC, Sevion plays Inside Linebacker for the CMS football team, is a member of Mock Trial, CMS Christian Athletes, Black Students Association and ASCMC. This past summer Sevion ran recruitment for a startup company – Hubdoc – based in Toronto. Outside of school and the Rose, Sevion loves to spend time with his family, read and meet new people.

Will is from Shaker Heights, Ohio, majoring in Government. He became interested in local government while interning for Cleveland City Councilman Jeff Johnson over the summer of 2017. In high school, Will participated in Public Forum debate, his school newspaper, and was on the Youth Forum Council of the Cleveland City Club. In addition to the Rose Institute, Will is also a staff writer at The Claremont Journal of Law and Public Policy. In his free time, Will reads Axios AM, watches Cleveland baseball and Bojack Horseman, and gets injured playing Ultimate Frisbee.

Jake is a freshman at Claremont McKenna College from Albuquerque, New Mexico dual majoring in Government and International Relations. Jake discovered his interest in politics from his involvement in high school Speech & Debate, but tailored his interest to local politics through his internship on an Albuquerque mayoral campaign. He is especially interested in criminal justice and education reform. Jake is also involved in CMC’s Model UN and debate teams. When he’s not working at the Rose, Jake is napping, listening to Serial, or binge-watching Survivor.

Johnson is a freshman from Portland, Oregon and is looking to major in PPE. In high school, Johnson served as the Student Body President and worked as a Victims Advocate at the Washington County District Attorney’s Office, inspiring his interest in government. Outside of the Rose, Johnson is involved in ASCMC and the CMC Mock Trial team. He also works as a server at the Athenaeum. In his free time, you can find Johnson shooting hoops at Roberts Pavilion, enjoying the cookies at Collins, and playing random pop songs on all the pianos on campus.

Ben is from Ashland, Oregon and hopes to major in Philosophy, Politics, and Economics. He became interested in state and local government through coordinating a mentoring program to promote educational equality at a local charter school, Kids Unlimited Academy, and through teaching a U.S. citizenship class in high school. At the Rose, Ben hopes to pursue research in education and immigration policy. In his free time, he enjoys creative writing, mock trial, and ballroom dance.

Hailing from Claremont, California, Naseem Nazari traveled long and far to work at the Rose Institute. Naseem’s interest in state and local government piqued as she listened to NPR on long car rides with her sister, and realized the power that politics/ politicians bestow in enacting lasting and purposeful change. Serving on the board of a local non-profit dedicated to education in high school, she is especially passionate about educational equality, and is hoping to do research pertaining to this field while working at the Rose. As of now, her major is undeclared, however she is deeply interested in Middle East Studies, Government, and Public Policy. During her free time, you can catch Naseem working out at Roberts Pavilion, eating sour candy, or playing with her incredibly adorable puppy, Joon.

Nandeeni Patel is from Murrieta, CA and is planning on dual majoring in Government and History. Throughout high school, all of her experiences have pulled her towards a path founded in policy reform and public service. Specifically, having been the State President of the California Association of Student Councils and President of the Murrieta Youth Advisory Committee, Nandeeni found an interest in research-based advocacy catered to state and local education policy. She is looking forward to learning from the Rose Institute and getting a deeper understanding of the works of federalism. In her free time, you can catch her drinking V8 Spicy Hot, watching reality TV, or seriously struggling in the back of the only studio at Hot Yoga Claremont.

Born and raised in Evanston, Illinois, Zane is a second year student at Claremont McKenna and hopes to major in Philosophy, Politics, and Economics. Zane found his passion for politics through his schoolwork and experience in community organizing, including within the mentally-impaired community. Zane hopes to expand his own knowledge of politics and make information more accessible to the public through working with the Rose Institute, specifically in relation to education, institutionalized recidivism, and election reform. Outside of the Rose Institute, Zane is the Vice President of Recruitment and Communications of the Claremont McKenna Mock Trial Team as well as a member of the Boxing Club. In his free time, Zane enjoys cooking, reading, and drinking coffee.