Although it is unlikely the construction sector will help the region recover from the current recession, another sector has the potential to kick-start an economic upswing: logistics and distribution.

International trade is an increasingly important component of the Inland Empire economy. The Inland Empire has emerged as a trade logistics hub for the western United States. Much of the cargo entering through Southern California’s seaports and airports is processed in inland warehouses because of the availability of cheap industrial space and lack of congestion in comparison to the Los Angeles region.

The Inland Empire’s trade infrastructure provides numerous trade-related employment and revenue opportunities. The region boasts proximity to the Ports of Los Angeles and Long Beach (which account for 30% and 27% respectively of total trade traffic on the West Coast) and Los Angeles and Ontario International Airports, as well as access to several interstate highways and a prominent rail nexus. In 2008, trade-related employment, which consists of transportation, warehousing, wholesale trade, and manufacturing, represented more than 18% of total non-farm employment in the region. Although trade has declined during the current recession, the Inland Empire’s strategic location and trade-related infrastructure will allow it to benefit tremendously from any rise in levels of exports and, especially, imports.

Similarly, international air cargo trade at Ontario International Airport increased by 109% from 2004 to 2005 and by 44% from 2005 to 2006, but declined sharply afterwards. Since 2006, imports through air and sea have shown minimal growth and the effects of this stagnation are clearly visible in the Inland Empire economy.

Meanwhile, the last decade has seen an increase in exports from the region. Exports benefit the regional economy by increasing the competitiveness of local firms and attracting firms to shift their base of operations from the congested Los Angeles area to the Inland Empire. Exports rose steadily between 2005 and 2007, with growth averaging 15% annually. In the first half of 2008, export volumes from the Inland Empire rose to $3.2 billion from $2.3 billion in the first half of 2007, an increase of nearly 37%. The rapid growth of the export industry is confirmed by the higher volume of outgoing international cargo at Ontario International Airport and the Los Angeles ports. Departing cargo from the former rose from slightly less than 4,000 tons in 2003 to almost 11,000 tons in 2008, an average annual increase of 26%. The lack of congestion at the Ontario Airport in comparison to LAX has led carriers such as UPS and FedEx to use Ontario as their distribution center for the west coast. The high tech goods originating from or arriving in the Inland Empire usually use air transport, while the majority of low value goods arrive or depart by sea. 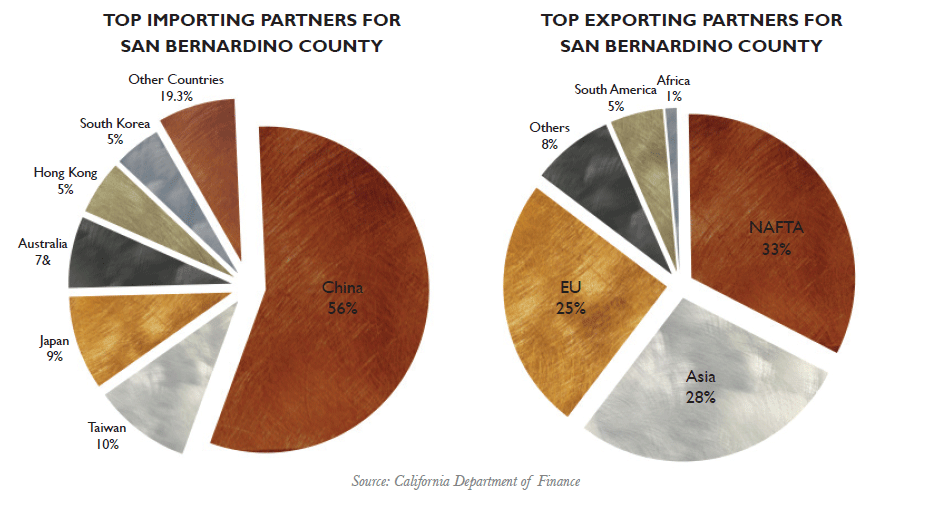 The Inland Empire’s main trading partners are primarily located in Asia, the South Pacific, and North America. Goods from Asia dominate vessel trade while the majority of goods from Canada and Mexico arrive via rail or road. China represents over 50% of the imports entering the Inland Empire by sea, followed by Taiwan, Japan, and Australia. The top export destinations for goods produced in the Inland Empire are North America (33%), Asia (28%), and the European Union (25%).

Locally produced exports could help the Inland Empire in its recovery, as its main trading partners are China and other Southeast Asian countries. According to The Economist, Asian emerging markets were projected to grow by at least 5% in 2009, and by even more in 2010. Rising consumption expenditures in Asia could result in higher exports, which would boost the local economy. An increase in import demand will probably not be observed until consumption in the United States shows signs of improvement.

An efficient transportation system is vital for any economy, particularly one that functions as a freight and shipping hub. The Inland Empire is well connected to neighboring states via rail, road and air. Interstates 10 and State Highways 60, 91, and 210 provide the necessary linkages between the Inland Empire and Interstate 710 which feeds into the Southern California seaports. Distribution from the Inland Empire to major markets in the United States flows via road through Interstates 10, 15, and 40 and via rail by the Burlington Northern Santa Fe Railway and the Union Pacific Railroad.

Transportation Networks in the Inland Empire

Impact of the 2008 Recession and Prospects for Recovery

Recent reductions in trade have had severe consequences for the Inland Empire. Industrial space absorption has fallen from 21.7 million square feet in 2007 to 7.4 million square feet in 2008. Industrial vacancy rates, which reached 2.7% in 2005, are currently at 7.9%. Falling imports have led to a decline in demand for warehousing and manufacturing space, which in turn has increased vacancy rates in the region. The falling import demand has had serious ramifications on employment as well. Trade related employment rose from 147,000 jobs in 1995 to 239,000 jobs in 2007, an increase of more than 61%. In October 2009, trade related employment fell to 205,000, reflecting a decline of nearly 15%.

Cargo flows at the Los Angeles seaports and airports have registered sharp declines. Niche ports like the Port of Hueneme in Ventura County, which relies on automobiles and import produce for its business, are the worst hit. Hueneme lost $1.3 million in the fiscal year ending June 30, 2009, and does not expect the trend to reverse soon.

2009 and Beyond: Prospects and Challenges

The uncertain U.S. economy is one of many factors that could pose problems for the trade sector of the Inland Empire economy. Legislation such as the Clean Air Plan and increased customs verification could increase shipping costs and decrease the flow of goods through the Los Angeles ports. If the Ontario Airport and the Inland Empire’s former military bases can substantially expand their cargo capacity, export-oriented, high-tech businesses may have an incentive to move there. Given the current limitations on the expansion of LAX, the Ontario Airport can take the opportunity to expand since it does not face similar restrictions. Inland Empire communities, rather than coastal areas (tied to LAX), could be the region’s future trade winners. The Alameda Corridor East and the Orangethorpe Corridor, grade-separated rail projects from the downtown railheads to San Bernardino, can also enhance regional competitiveness by removing congestion from highways and increasing rail efficiency. Projects, focused on improving logistics infrastructure and the transportation network, are critical for the Inland Empire economy. Investment in these areas could reap large benefits for the region by making Southern California an even more important trade gateway between Asia, the South Pacific, and the United States.

The foregoing analysis demonstrates the relative importance of trade and its economic significance in the Inland Empire. Recovery in this region hinges on an increase in current trade flows. The following section stresses the increasing importance of the City of Ontario in this context. (See Ontario: The I.E.’s New Urban Center)