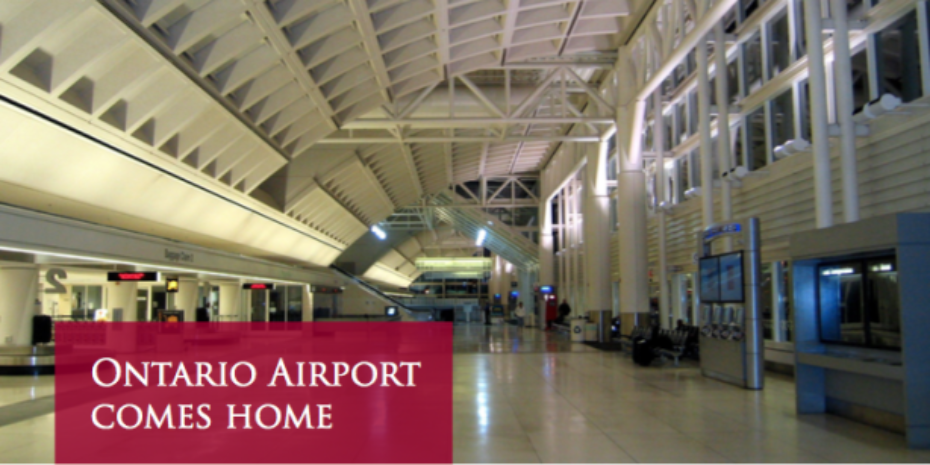 On August 6, 2015, the City of Ontario and the City of Los Angeles announced that Los Angeles had agreed to relinquish ownership of Ontario International Airport (ONT) and transfer it to local control. This agreement comes after nearly five years of effort by local officials — and several law suits ­— to wrest control of ONT from Los Angeles.

ONT is owned and operated by the Los Angeles World Airports (LAWA), a department of the City of Los Angeles, which also manages LAX and Van Nuys Airport. Ontario Airport began its life as Latimer Field in 1923. In 1929 the City of Ontario made the first of several land purchases for the airport and Latimer Field became known as Ontario Municipal Airport, renamed in 1946 to Ontario International Airport. The City of Ontario owned and managed the airport until 1967. At that time, the City of Ontario signed a joint powers agreement with Los Angeles for the management and development of ONT. The city transferred ONT ownership to LAWA in 1985, with the broad goal of increasing airport regionalization. The regionalism theory held that ONT, LAX, and Van Nuys Airport would all be more successful if the three airports were managed together and operated as an integrated entity. In fact, ONT thrived from the early 1980s through the mid-2000s, increasing annual traffic from approximately two million to 7.2 million passengers in 2007. During this period the airport enjoyed increased business from airlines and investments by LAWA, including the completion of two new terminals in 1998. 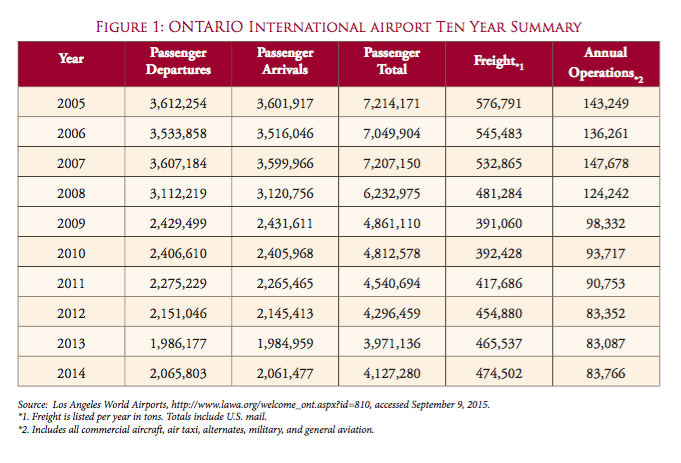 What accounts for this dramatic drop in passenger traffic? In addition to losses flowing from a bad economy (and suffered by all airports), the main reason that airlines steadily cut back on flights at ONT is that it is one of the most expensive medium-size airports in the nation for the airlines to use. Cost Per Enplanement (CPE) is an industry-standard measure of the cost for using an airport. ONT has one of the highest CPEs in the country at $13.50. In comparison, LAX’s CPE is $11.23, John Wayne Airport’s $9.24, Long Beach’s $6.64, and Burbank’s $2.09. It is noteworthy that ONT’s CPE is even higher than LAX’s and much higher than the mid-size airports with which it is competing. This high CPE puts ONT at a competitive disadvantage and significantly impacts the airport’s ability to attract airlines to increase traffic. As shown in Figure 1 the Ontario International Airport suffered losses in traffic across all services between 2005 and 2014, including a 42.8% drop in total passenger traffic, 17.7% decrease in freight, and a 42% drop in annual operations (including all commercial aircraft, air taxi, alternates, military, and general aviation.) 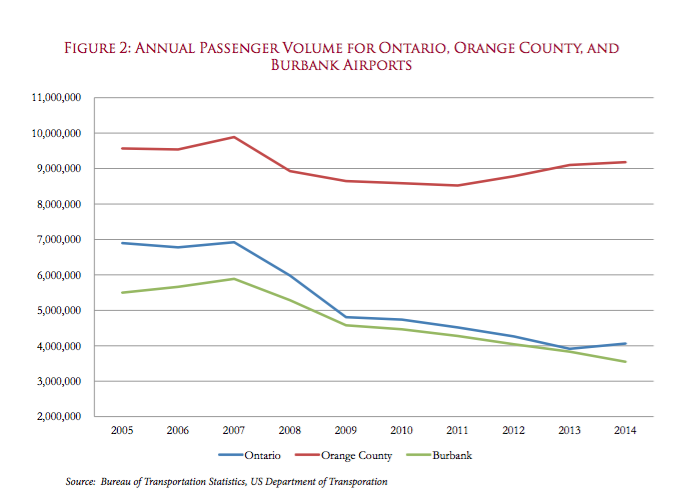 This steep decline spurred the City of Ontario to form the Ontario International Airport Authority (OIAA) in 2012 by executing a Joint Powers Agreement between the City of Ontario and San Bernardino County. The OIAA sought to “provide overall direction for the management, operations, development and marketing of ONT for the benefit of the Southern California economy and the residents of the airport’s four-county catchment area.” The OIAA has five members: President Alan D. Wapner, Vice President Gary Ovitt, Secretary Ronald O. Loveridge, and Commissioners Jim W. Bowman and Lucy Dunn.

In 2013, OIAA released its strategic business plan to outline its goals. At the highest level, it proposed to treat the airport as a private sector entity to improve its efficiency, marketability, and ability to create strategic partnerships. As noted above, compared to other medium hub airports, ONT suffers exceedingly high operating costs, and thus one of its most important goals was to reign in these costs. The committee proposed to reduce its current employees and generally begin contracting out services that were non-aviation-related. In addition, it hopes to work alongside the City of Ontario and San Bernardino County, as well as local agencies, to make sure all are implementing their services in the most efficient matter. It also suggests developing airport business by making use of its geographical competitive advantage to access and to distribute large volumes of cargo, freight, and express mail. Like any other airport, it also strives to make private sector contracts more accessible and optimize revenue from food and beverage and rental car services, among others.

With respect to its airline partners, the OIAA proposes to increase demand for flights by working with local agencies to develop incentive programs to drive tourism. Finally, it aims to improve the airport experience by reassessing the revenue/collection program and conducting surveys to target customer pain points. With these clear economic objectives and a well-defined charter, the OIAA was able to demonstrate its commitment to developing the airport as a strong economic driver and move discussion forward with the City of Los Angeles and LAWA. The OIAA played a critical role in reaching the settlement terms.

Although the basic terms of the ONT transfer have been agreed upon, there are many steps that must be taken before the process is complete. The key figures in negotiating the deal have been the Los Angeles Board of Airport Commissioners, Los Angeles City Council, Ontario City Council, the Los Angeles City Council Trade, Commerce and Tourism (TCT) committee and the OIAA. The Federal Aviation Administration (FAA) is still responsible for reviewing and approving the proposal. Los Angeles Mayor Eric Garcetti and OIAA President Alan Wapner confirmed the details of the deal in the Settlement Letter of Intent signed on July 30, 2015. The formal transfer and approval process will begin in October 2015 with the execution of a Settlement Agreement. FAA approval may take up to another year.

During the negotiations, LA city officials sought compensation for building two new passenger terminals and various property acquisitions through the years. Their initial price was $400-$475 million, based on a valuation commissioned by LAWA. The total price outlined in the Settlement Term Sheet is $190 million, about half of what LAWA initially sought and less than the $250 million the City of Ontario had offered back in 2012. See Figure 3 for an outline of the financial terms of the deal. Ontario and Los Angeles signed the Settlement Agreement Letter on July 30, 2015. The parties are to execute a long form Settlement Agreement within 60 days of that date. Within 30 days of the Settlement Agreement, the City of Ontario must transfer $15 million into an escrow account for the benefit of LAWA. Ontario is then obliged to deposit an additional $15 million no less than 30 days before the scheduled transfer. LAWA will also transfer $40 million from the Ontario unrestricted cash account to a non-Ontario account, leaving Ontario with jurisdiction over any remaining funds in the ONT account. Within five years of the airport transfer, Ontario is to pay the Los Angeles $50 million and an additional $70 within 10 years. This adds up to $190 million in total compensation. 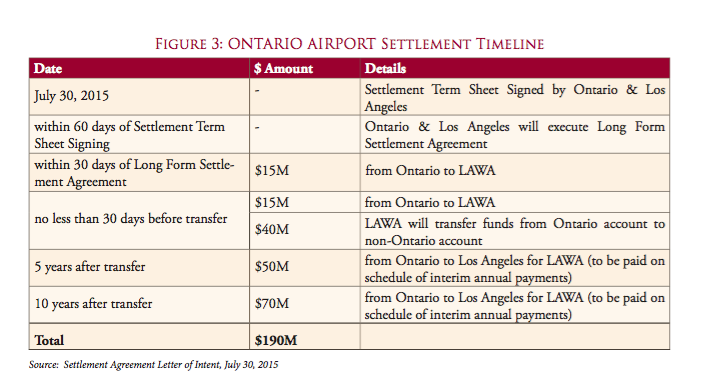 Alan Wapner, president of the OIAA, said “The negotiations are progressing well and are on schedule.” He noted that there are a number of milestones along the way to final transfer. The long form Settlement Agreement must be approved by the Los Angeles Board of Airport Commissioners and the city councils of Los Angeles and Ontario. OIAA has to hire a CEO for the airport; the search process is underway. The Federal Aviation Administration must issue an FAA Part 139 Airport Certification to the OIAA. Finally, the OIAA will assume sponsorship of the airport.

Despite growing for the greater part of LAWA’s tenure as owner, ONT saw a continual decline in business following the Great Recession. Alongside increasing competition among regional airports, a falling demand for flights, and non-competitive operating costs, the airport could not remain on its flight path. The agreement to transfer of ownership back to the City of Ontario and San Bernardino County marks a return to the airport management’s initial charter to help the Southern California economy thrive, and offers new opportunities for all involved parties. The newly acquired land and airport offer a tremendous promise of economic growth. As the FAA reviews the proposal, Inland Empire communities can look forward to a better tomorrow.

Note: The text of an earlier version of this article misstated 2013 and 2014 passenger traffic on paragraph 3 and the amount of the fund transfer on paragraph 9.