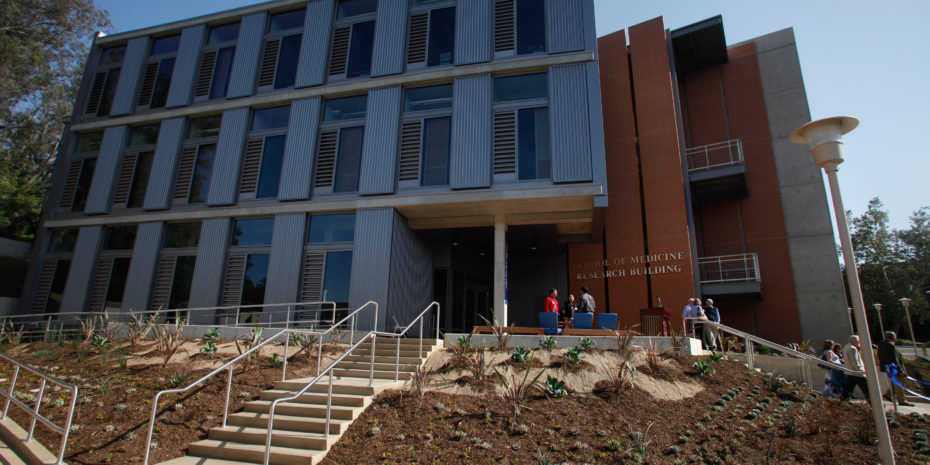 Riverside County experienced huge population growth from 2000 to 2010, ranking as the fifth most rapidly growing county in the United States. Riverside County continues to trail the state in education, employment, and number of insured people. Healthcare associated with chronic problems like obesity currently costs the county a tremendous amount every year. Now, several changes are occurring to lead Riverside County’s health care system into the future, with a focus on preventative care and the development of programs to insure the currently uninsured.  Experts like Claremont Graduate University’s Dean of School of Community and Global Health, C. Anderson Johnson, and Riverside County’s Director of Public Health, Susan Harrington, agree that proper execution of preventative programs will be crucial to the county’s health care progress. 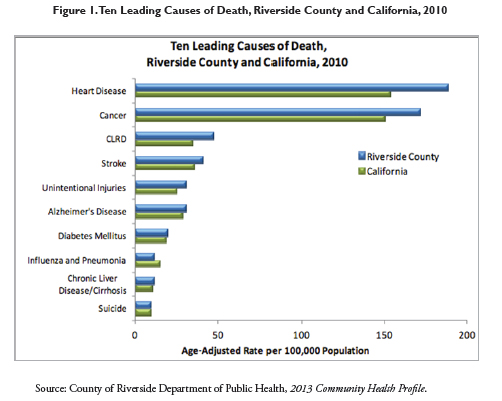 Heart disease accounts for the largest portion of deaths in Riverside County every year, approximately 27 percent. The majority of heart disease is attributed to excess lipids and cholesterol in the blood. Heart disease is an ideal example of a chronic disease that can be addressed by preventative measures. Because it is a function of diet and exercise, change in community attitude has the potential to have a significant impact on health in the county. The second leading cause of mortality in Riverside County is cancer, accounting for another quarter of annual deaths. There is a much higher prevalence among men than women, which the 2013 Community Health Profile attributes to the disparity in tobacco use. Tobacco use is a primary target in order to improve public health in the county. Chronic Lower Respiratory Disease (CLRD) is an umbrella term for asthma, chronic bronchitis, emphysema, and other lower respiratory illnesses. CLRD is also less prevalent among females than males, which may also be attributable to the difference in the tobacco use of the two groups. Diabetes is another a major concern. While it is not one of the top five reported causes of death, its prevalence is increasing. It is also possible that diabetes is underreported as a cause of death. Sometimes it can be found listed as an underlying cause of death but it is rarely reported as the primary cause of death.  Some estimates predict that as much as 8.3 percent of the US population has diabetes. Diabetes can also be prevented or controlled with proper nutrition and exercise. In addition to the aforementioned health problems, it should be noted that the Riverside County environment ranks fifty-second of California counties for its physical environment being conducive to health. The public health community agrees on the need to change behaviors. Less substance use, specifically tobacco use, more physical activity, better nutrition, and a healthier environment have the potential to improve public health substantially. 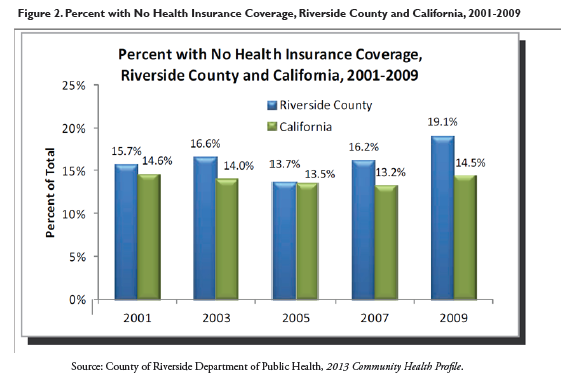 Dean Johnson says that the shift to a procedures-based approach is completely necessary. He emphasizes approaching health problems holistically by “addressing both individual behavior but also the other aspects of society that support chronic disease risk factors.” Like many public professionals he believes that the shift in focus to preventive care will eventually bring down health care costs.  There is, however, also a body of research that suggests that for most preventive services, expanded utilization leads to higher, not lower, medical spending overall.  As the Congressional Budget Office explained in 2009, this is because “doctors do not know beforehand which patients are going to develop costly illnesses. To avert one case of acute illness, it is usually necessary to provide preventive care to many patients, most of whom would not have suffered that illness anyway.”  The CBO cites research that concludes that the added costs of widespread use of preventive services tend to be greater than the savings from averting the illness.

One project underway is the highly anticipated opening of the UC Riverside School of Medicine. Dean Johnson’s excitement regarding the new school comes from the school’s promise to “utilize community hospitals” as opposed to “develop[ing] their own hospitals.” The new school touts its community-based focus and mission to bring committed doctors and economic stimulus to the county. Generally, medical schools gear most of their curricula to their base hospital; UC Riverside will focus on the surrounding community and already-established medical centers. In 2009 the ratio of people to primary care physicians, 1,576 to 1, was nearly triple the national benchmark and double that of the state of California. There has been a real push to open the new medical school in order to produce more doctors.

The first, four-year class will enter UC Riverside Medical School this fall, although lawmakers are still trying to secure long term funding to sustain the school. Two in particular are leading the charge. Senator Richard Roth and Assemblyman Jose Medina are requesting that $15 million a year for the next ten years be allocated in the state budget to funding the medical school. The proposed $15 million would be added to an already secured $10 million a year from private donors and local government. Though some lawmakers oppose the bill, its sponsor, Assemblyman Medina, argues that additional funding at the state level is necessary as an investment in the future of health in Riverside County. As the number of uninsured people is predicted to decrease as a result of the Affordable Care Act, the county will need more doctors to meet the demand for care. Students entering the four-year program will do most of their clinical training in the community. The medical school’s involvement is just one piece of the puzzle in the health care shift. Many believe its impact will be large. Riverside County plans to focus most of its future efforts around preventative care. With initiatives like Healthy Riverside County, the county plans to tackle problems of nutrition, physical activity, and tobacco use. These three elements are strongly correlated to the chronic diseases, several of which are the leading causes of death among Riverside County residents and US citizens. 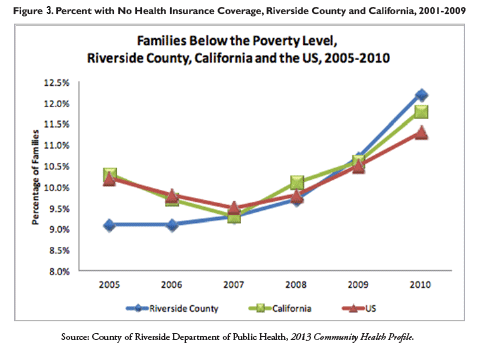 Additionally, as the healthcare system shifts to adjust for next year’s implementation of the Affordable Care Act, Riverside County is scrambling to prepare for an anticipated increase in the newly insured. Dean Johnson hopes that its implementation will mean an easier shift from a procedures-based approach to an outcomes-based approach. While the change will mean more people have access to healthcare, a county already facing a shortage of doctors may struggle to keep up.

As Riverside County’s population is on the rise, there will be larger demands upon the local health care system in the near future. If the new programs are successful in changing nutritional habits, physical activity levels, and reducing the use of harmful substances, the healthcare outcomes may show evidence of the county saving on healthcare expenditures. The new initiatives have the potential to increase efficiency in the management and delivery of healthcare.

With a growing population, a shifting demographic, and a change in disease trends, there is no question that the Riverside County health care system must change, and senior officials recognize this. Experts like Dean Johnson emphasize that the most successful preventative care-based systems incorporate not only education but also the right mix of public and private funding, as well as involvement of infrastructure projects to create better environmental settings. Moving forward, Riverside County’s approach will be to shift to preventative and outcomes-based care. The goal will be to insure the uninsured, change lifestyle choices, and to address environmental factors including access to care.