Local governments are under tremendous pressure to deliver services to their constituents with ever shrinking budgets. Many have responded by asking, “Are there other ways to provide public services?” Some are turning to other government agencies and the private sector as cost-effective alternatives. These contracting partnerships take many forms, and while many cities are still “Full Service Cities” (cities that do not contract for most of their services), others have been contracting out for more than fifty years.

The first city in the nation to experiment with contracting was Lakewood, California in 1954. Lakewood, unincorporated at the time, faced aggressive, and unwelcome, annexation attempts from the neighboring city of Long Beach. John S. Todd, the former city attorney of Lakewood and father of what came to be known as the “Lakewood Plan,” describes the genesis of the modern contract city in his memoir: “I suggested…that Lakewood incorporate and contract with [Los Angeles] County for the performance of municipal services so as to avoid costly capital investment in buildings and other facilities…. This was the first time it had occurred to me that there was a method of incorporating and thereby preserving Lakewood’s identity, continuing county-type services, which the community had been receiving, and avoiding annexation to Long Beach.” This, then, was the beginning of The Lakewood Plan.” After Lakewood’s successful incorporation, many other cities began adopting variations on the Lakewood model.

In the Inland Empire today, many cities and local governments employ some variation of the original Lakewood Plan. Contract emergency services – police and fire protection – are the most obvious examples of services for which cities have recently received media attention, but everything from tree-trimming to traffic signal repair, to legal services can be outsourced. Some cities and counties are even outsourcing library services to private, for-profit companies.

Not only are the types of contract services varied, the partnerships themselves also take a number of forms. Cities can contract with other governmental entities such as counties or neighboring cities, special districts, and, of course, private sector companies. If a Care ambulance drives by, a Burrtec truck picks up trash weekly, or the county sheriff’s office responds to a 9-1-1 call, those entities are providing services under contract with the local government. In Lakewood, for example, the city hired Los Angeles County to provide a variety of municipal services. Riverside County similarly provides police services to seventeen incorporated cities and one tribal area. Nineteen cities contract with Riverside County Fire for emergency services.

“You contract for services because of economies of scale,” says Palm Desert City Manager John Wohlmuth. “You get all these ancillary services that, if you did not contract, you would have to supply as a city and use them very rarely.” Because it chooses to contract for services, Palm Desert, a medium sized city of approximately 50,000 people, has access to a SWAT team, DUI enforcement, hazardous material clean up crews, helicopters, and other specialty equipment that would not be cost-effective to provide in-house. Even more basic facilities such as public service yards and stations can be provided more efficiently when the cost is spread across different jurisdictions. As Wohlmuth says, “you don’t necessarily pay 100% for [these services], but when you need them, they’re there.”

There are examples of cities forced to take the contract model to an extreme. The city of Maywood laid off almost all its public employees in 2010. It kept only the city manager, city attorney, and the city council. It contracted with Los Angeles County to provide police protection and with its neighbor, Bell, for all other services. The city council took this action because Maywood had a budget deficit and found itself in the position of not being able to secure insurance due to a history of lawsuits, mostly against its police department.

Many cities fear a loss of identity if they no longer provide certain services. What is a city, some may ask, if it does not have its own police department, fire department, public works department, or finance department? The residents of Maywood, however, are not bothered by this. Following the wholesale change last summer, the New York Times reports that residents noticed an improvement in the delivery of services, felt safer, and were generally more satisfied with the way their community was governed. 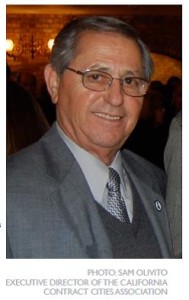 It is hard to argue with the trend. “Residents and council people who have the responsibility for providing the best possible services they can and keeping their costs low, have looked at contracting because it is flexible and more economical,” states Sam Olivito, Executive Director of the California Contract Cities Association.

Cities and counties contract for a wide range of services. For example, Riverside County employs Library Systems Services, LLC (LSSI), a Maryland-based for-profit company to run its library system. LSSI replaced the City of Riverside, which had managed the County’s libraries for eighty-five years. It beat out competing bids from the Riverside County Office of Education and the San Bernardino County Library. Within the first year of the partnership the library system saw its operating costs decrease by $900,000 while its materials budget doubled. In a report released last year – thirteen years after Riverside County hired LSSI – the County cites many achievements including twenty completed construction projects, the implementation of six joint-use library facilities shared with local school districts, the creation of more than 100 new jobs, an increase in the book budget from $180,000 in 1997 to $2.6 million in 2010, and a 63 percent increase in the number of visitors each year.

An interesting aspect of the Riverside County/LSSI partnership is that LSSI offered employment to all existing library staff when it took over in 1997. The new LSSI employees received the same rate of base pay and accumulated vacation time as they previously held. They were given the option of participating in LSSI’s 401-K plan and other LSSI employee benefits. This removed some expensive aspects of their employment from Riverside County’s budget and gave LSSI more staffing flexibility than the County ever had. Many of the incumbent employees are still working for the library system, with more than fifty marking ten years of service with LSSI in 2008.

Sam Olivito insists that competitive bidding for government contracts drives down prices and that shifting potential liability to private sector firms can save cities in unforeseen future costs as well. He adds, “The beauty of contracting is its flexibility.” Cities are not responsible or additional future costs such as pensions and workers’ compensation for contract employees. And in tough economic times, it is easier for cities to scale back on the amount of services they provide. Wohlmuth agrees, “I can adjust contracts far easier than I can layoff employees and reorganize a city.” An additional benefit is that smaller full-time staffs reduce the bureaucracy within city governments.

There are, of course, disadvantages to the contract city model. Once a city decides to outsource a service, it must go through the difficult process of re-assigning or dismissing city employees. Also, contract workers may have responsibilities to clients in multiple jurisdictions, which can result in slower response times. For example, Palm Desert used to contract for traffic signal repair services, but, according to Mr. Wohlmuth, it took repair crews two hours to travel to the desert before they could start fixing a broken signal – a delay that was unacceptable to the city. Palm Desert recently chose to bring that service in-house in an effort to reduce response times.

Cronyism and corruption are also concerns, as these lucrative government contracts can lead to outsized profits for private sector companies (although these concerns are certainly not limited to public/private contracts). Olivito insists that this is not a problem so long as appropriate controls are implemented. Making the process open and transparent, he argues, is the way contracting should be done. But ensuring that the bidding process is always fair, balanced, and non-biased, is hard to guarantee. Moreover, successful contracting requires ample supervision and oversight on the part of the city.

One counter-intuitive result of contracting for services, however, is that cities who do so may wind up with little or no direct control over contract workers’ benefits. If the service provider decides to increase workers’ retirement plan, the contract city and the taxpayers have little control. In Palm Desert, “we don’t have a lot of say in what we think about those extra expenses or those contracts. So, the price has been creeping up because those benefits have been creeping up,” says Wohlmuth. One response to this is that the city could find another contract provider. “It’s a competitive world,” points out Sam Olivito.

Increased attention to public employee pensions and benefits is also driving interest in privatization. A steady stream of stories about bloated pensions from California cities such as Bell, Vernon, and others has resulted in intense scrutiny to benefit costs for all public employees. It is not then surprising that cities facing such pressures would seek to contract with private companies that may not be burdened by rich benefit programs. It is also not surprising that organized labor opposes this development.

Public employee unions are fighting against the wave of privatization. Camarillo, Santa Clarita, and Ventura are each contracting for, or considering outsourcing, library services to LSSI. According to privatizationbeast.org, a blog written by the Service Employees International Union, “Privatizing public libraries means libraries will be de-professionalized and residents will pay more and receive less, while LSSI makes a profit for its investors and shareholders.” The public employees are fighting back in the state legislature. On June 3, 2011 the California Assembly passed AB 438, a bill proposed by Das Williams (D-38), which would strip cities of the authority to outsource library services. “Elected officials and lobbyists in support of privatization tried to kill the bill but thousands of California residents made calls in support of AB 438 and it passed 41 to 28,” according to a blog written by the Southern California Public Service Workers. Having passed the Assembly, the bill has been introduced in the California Senate and referred to committee. The California League of Cities strongly opposes the bill on the grounds that it will tie the hands of local governments at a time when they need more flexibility, not less.

As with most debates, there are reasonable arguments to be made on both sides and the decision to contract ultimately rests with the community. Local governments that are focused on efficiency may prefer to contract for services. Others that value workforce stability, or have a strong union presence or history, may prefer the traditional in-house model. A multitude of exogenous factors might ultimately influence a city’s decision.