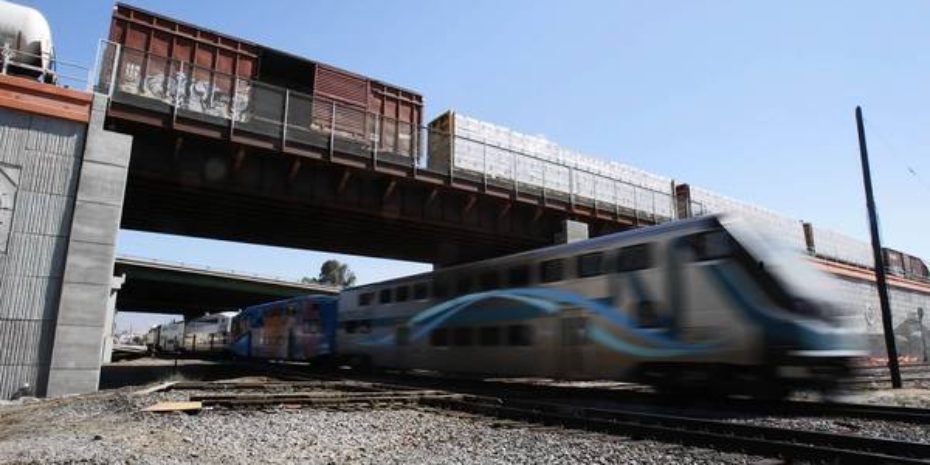 First built in 1883, Colton Crossing historically is known as the site of one of the most heated railway construction conflicts of the 19th century, resulting in a personal confrontation between then California Governor Robert Waterman and the famed lawman Virgil Earp, an event that was later dubbed as “The Battle of the Crossing.” Located in the city of Colton in San Bernardino County, Colton Crossing is recognized in modern times as one of the busiest railway junctions in the United States, controlling most of the rail traffic into and out of Southern California. Used by BNSF Railway (BNSF) and Union Pacific Railroad, as well as for commuter services by Metrolink and Amtrak, Colton Crossing serviced more than 110 trains daily in 2008. However, the crossing’s facilities were not built to handle that volume of traffic. As one of the main shipment corridors for the regional transportation of goods from the Ports of Los Angeles and Long Beach, the Colton Crossing was responsible for cargo from the largest combined harbor in the United States. The volume of cargo anticipated to move through the Ports of Los Angeles and Long Beach is expected to double by 2020, drawing serious concerns about Colton Crossing’s load capacity. Due to heavy usage, trains were already forced to idle at the point where the existing lines cross, causing severe delays—at times up to four hours. Such delays also impacted the efficiency and reliability of passenger train operations, and affected local communities due to the blockage of local arterials, noise, and air quality emissions associated with idling trains.

BNSF and Union Pacific selected the Alameda Corridor Transportation Authority to evaluate the cost, design, and construction of a new east-west or north-south structure to alleviate rail congestion and resolve affiliated issues with the Colton Crossing. The final study was then delivered to the San Bernardino Associated Governments (SANBAG) on December 15, 2006 on behalf of the railroads. By 2008, SANBAG formalized its position as the neutral party in discussions between the private railroads, the City of Colton and Caltrans on the financing and design of the new Colton Crossing construction. Parties from the public and private sector were involved from the beginning as a Project Development Team was formed under the direction of SANBAG’s Director of Project Delivery, Garry Cohoe. As various proposals were evaluated, an outside firm, HDR Engineering, was hired by the team to lead the environmental studies and assess six proposed solutions. Cost estimates for the six proposals ranged from $200 million to $2 billion, allowing for some to be eliminated based on cost alone. Ultimately, HDR and the Project Development Team determined that the most practical and cost effective solution was to bring the Union Pacific tracks that run east to west up over the north-south BNSF lines. The 1.4 mile concrete flyover was estimated to cost $202 million and to take up to three years to complete. Construction began in November 8, 2011 and the original projected completion date was in early 2014.

Though the Union Pacific flyover proposal was one of the more economical of the proposed designs, procuring all the necessary funding for the project was still a major challenge. The project received funding from federal grants, taxpayer-approved state funding, and private financing from BNSF and Union Pacific. More specifically, in 2010, the Colton Crossing Project received $34 million from a Federal Tiger Grant through the American Recovery and Reinvestment Act federal stimulus fund. With cooperation from Caltrans, the project was also eligible to receive $41 million from State Proposition 1B funds from the Transportation Corridor Improvement Fund after the necessary environmental documentation was completed within the year. The railroads contributed the remaining $18 million in construction costs.

Both the railroads and SANBAG worked together to address some of the concerns from the local community. In particular, Colton residents were concerned with noise pollution from trains, as well as air quality and safety. Though outside the scope of the Colton Crossing Project, the three entities jointly funded the creation of two “Quiet Zones” during the flyover’s construction, which eliminated nighttime train soundings (except in the event of emergencies). Furthermore, SANBAG and Union Pacific collaborated to finance a rerouting of the 9th Street rail tracks, which previously ran through a residential neighborhood in South Colton.

With shared resources from all parties, the Colton Crossing Project is a model for the efficiency and success of infrastructure projects using the public-private partnership structure. The fundamental collaborating principle behind a public-private partnership is not new. A public-private partnership is a contractual agreement between a public agency (federal, state or local) and a private sector entity. Through this agreement, the skills and assets of each sector (public and private) are shared to deliver a service or facility for public use or public improvement. According to the National Council for Public-Private Partnerships, they have been in use in the United States for over 200 years and thousands are operating today. These partnerships take a variety of forms and are used for a wide range of services including water/wastewater delivery, transportation, urban development, and delivery of social services. The council estimates that the average American city works with private partners to perform 23 out of 65 basic municipal services.

Though the public-private partnership model is not a panacea, in cases such as the Colton Crossing Project, it proved to be an ideal solution to what otherwise may be a daunting task. Open communication from the railroads, government entities, and the local community from the beginning was an essential factor in its success and is a critical aspect when evaluating any effective, sustainable partnership model. Given this early collaboration, the Colton Crossing Project is a prime example of the benefits of a well-structured public-private partnership. By establishing a consensus goal and consistently receiving input to reach that goal from members of all invested parties, the public and private sectors were able not only to address their own concerns, but also those of the local community. The Colton Crossing Project was completed on August 16, 2013, eight months ahead of schedule and at a cost of $93 million, more than $100 million under budget. Caltrans’ cooperation in granting some excess freeway right-of-way allowed for a design that greatly reduced both construction time as well as the overall cost of the project. Furthermore, collaboration from Caltrans and the railroads allowed for applications for both federal grant funding and state funding to run smoothly. Caltrans Director Malcolm Dougherty projects that the new construction will produce “travel time savings valued at $241 million and reduce greenhouse gas emissions by 31,000 tons annually.”

In a time when California is still plagued by the impacts of the 2008 recession and severe budget cuts, public-private partnerships represent a feasible and sustainable model of financing critical infrastructure. The Colton Crossing Project represents a gold standard for such cooperation and members from both the private and public sector attribute the project’s success to its collaborative component. With the release of the American Society of Civil Engineers’ most recent infrastructure grade report, it’s anticipated that the U.S. will need an investment of $3.6 trillion by 2020 in order to meet the nation’s current infrastructure needs. Public-private partnerships represent a sustainable and effective method of financing these essential projects.