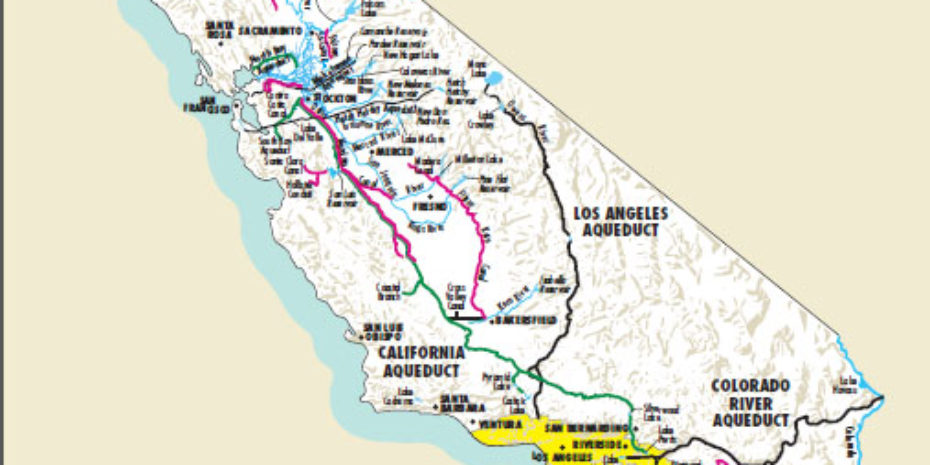 Water management has historically been a source of contention and conflict in California. California’s water governance complexities have developed over the course of the state’s history to control water supply, water quality, and flood control. The two state agencies at the forefront of water management are the California Department of Water Resources (DWR) and the State Water Resources Control Board (SWRCB). Both agencies hold tremendous clout with each occupying a separate niche. The DWR focuses on water delivery, water supply planning, as well as infrastructure development. It was created in 1956 by the state legislature in order to develop and manage the State Water Project, which delivers water to 25 million Californians and helps sustain 750,000 acres of farmland. It organizes the state into ten water regions. The SWRCB serves a more regulatory function. Created by the state legislature in 1967, it handles water rights issues and manages water quality permitting. Nine regional water boards throughout the state enforce water quality objectives set forth by the SWRCB. Four federal agencies also play critical roles in California water management. The Bureau of Reclamation, the Army Corps of Engineers, and the Geological Survey all focus on water supply. The Environmental Protection Agency and the Geological Survey handle water quality oversight, and The Army Corp of Engineers and the Bureau of Reclamation manage flood control. Federal, state and local entities such as cities, counties, tribal governments, special districts, and private water companies tend to take on multiple roles in managing water supply and quality control. There are more than 1,200 water districts in California, performing a wide range of services. Many of them provide more than one of the three designated water services: water delivery, sanitation, and flood control.

Water comes into the state from three sources: precipitation, imports, and inflow to the state. Weather, including precipitation, is the most important factor in determining the total amount of water available in any given year. Precipitation varies widely year to year. In drier years, overall water supply available to dedicated uses declines because less water is coming into the system from rain and snow. During such dry years, local groundwater use increases. During wet years, more water is available from surface water supplies. This allows groundwater systems to refill and this water is then more plentiful during dry years when surface water is in lower supply.

Statewide, precipitation produces about 200 million acre-feet of water each year, mostly in the northern part of California. More than half of that water will evaporate, percolate into the ground, or otherwise be used by nature. The remaining amount, slightly less than half, will flow into rivers and streams. Some portion of this is collected for urban or agricultural use, to put into reservoirs or groundwater storage, or to leave in the environment. In an average year, such as 2000, urban use was 11%, agricultural use was 34%, and 48% was left in streams and rivers. In a dry year like 2001, urban use was 13%, agricultural use was 52%, and only 35% was left for the environment.

The California Department of Water Resources designed, built, and operates the State Water Project to convey water from Northern California to its many users in the south of the state. It begins at Lake Davis in Northern California and runs 600 miles south to Southern California. The system includes 34 storage facilities, 20 pumping plants, four pump-generating plants, five hydroelectric power plants, and about 700 miles of canals, tunnels, and pipelines. There are 29 water agencies that act as wholesale buyers of water from the State Water Project. Six SWP contractors supply water to retail distributers in the Inland Empire.

Depending largely on snowpack for the year, the Department of Water Resources establishes the amount of water each contractor may pull from the SWP. This number is reported as a Table A allocation for each contractor. It is rare for the State Water Project to be able to deliver the full entitlement. The amount of water available is determined primarily by weather, including precipitation (both amount and location). Other system constraints like storage capacity, availability of groundwater, and environmental factors (which can vary tremendously year to year depending on the current health of a given ecosystem) are also important. In the past Table A approved allocations have ranged from 100% in wet years, to much lower, even 30% in dry years. Until now, the lowest amount of water ever delivered was 0.55 million acre-feet, about one-eighth of the current statewide allocation, during the drought of 1991. California, however, is now in the midst of a three year dry spell — 2013 was the driest year on record. In January 2014 the Department of Water Resources announced it would approve 0% of the Table A Allocation for 2014. It is allowing SWP contractors to use any carryover that they may have from 2013. Statewide, the total carryover amount for all 29 SWP contractors is 463,277 acre-feet, only 11% of the Table A maximum allocation for 2014. The drop to zero percent of the amount requested by SWP contractors, though stark, is a continuation of the steady decline in the last three years. DWR approved 80% in 2011, 65% in 2012, and 40% in 2013. The department may, however, revise the allocation, based on changing conditions. This year, thousands of acres will go unplanted and farmers will have to rely on available groundwater to get through the drought. During wetter years, groundwater can be stored throughout the state. This provides a dependable water source for drier years. Groundwater is a crucial part of the state’s water supply, providing approximately 30-40% of the state’s water every year. About 75% of Californians obtain some portion of their drinking water from groundwater sources. Storage is another indispensable part of water management. The federal government owns over 17 million acre-feet of water storage space in the state while the state of California owns a little over 3 million acre-feet. The California Department of Water Resources has reservoirs in both San Bernardino and Riverside counties, including Lake Mathews (capacity 182,000 acre-feet), Lake Perris (currently undergoing seismic remediation), Lake Skinner (capacity 44,000 acre-feet), and Diamond Valley Lake (capacity 810,000 acre-feet). The Metropolitan Water District uses these water reserves in San Bernardino and Riverside counties. The reservoirs are carefully managed for water quality.

In addition to the State Water Project and groundwater supplies, the third source of water for the Inland Empire is the Colorado River. The Metropolitan Water District manages the Colorado River Aqueduct, which runs from Parker Dam at Lake Havasu, to Lake Mathews, near Riverside. It has an annual capacity of 1.3 million acre-feet. The water travels through 63 miles of canals, 92 miles of tunnels, 55 miles of conduit, and 144 underground siphons. The system includes nine reservoirs, with a total capacity of 1,972,000 acre-feet of water storage. Seven states and parts of Mexico lay claim to water from the Colorado River. Water use is governed by a complex set of agreements, international treaties, judicial decrees, federal and state laws, and water contracts, among other things. It includes the 1922 Colorado River Compact, apportioning water use among the seven states and outlining a priority system for use of the water. California’s basic apportionment is 4.4 million acre-feet, plus surplus water if available. Of this, 3.8 million acre-feet or 86% is used for agriculture, mostly to the Imperial Irrigation District, and to a much lesser extent, the Palo Verde Irrigation District, the Yuma Project, and the Coachella Valley Water District. The Metropolitan Water District holds a fourth priority to 550,000 million acre-feet and a fifth priority to another 662,000 acre-feet. Historically, California has been able to use even more water from the Colorado River, in addition to its allocation. This was due to surplus conditions and/or getting Arizona’s unused apportionments. However, persistent drought conditions in the Colorado River basin and Arizona’s growing water use make it unlikely that California will continue this practice.

There are some new sources of water planned for the future. A desalination plant is slated to open in 2016 in San Diego County in order to bridge the growing gap between available surface and groundwater resources and the statewide need. According to the DWR’s 2009 Water Plan Update, by 2025 the state will require at least 275,000 acre-feet per year of desalinated water. The plant in Carlsbad will produce 56,000 acre-feet per year. In addition the MWD’s Integrated Water Plan hopes to have 150,000 acre-feet per year of desalinated water by the year 2020. The Carlsbad plant in San Diego is not the only desalination project in the state. Orange County also has a desalination plant in the works at Huntington Beach. The Orange County project is has Coastal Development, Discharge, and Drinking Water permits and will be comparable in size and output to the San Diego plant upon its completion. Although both of these plants pull water from the Pacific Ocean, desalination technology is also being used further inland. Chino Basin Desalter Authority has a groundwater remediation program that makes available water in the area potable. It distributes treated water to member agencies which include Jurupa Community Services District, the Santa Ana River Water Company, the Cities of Chino, Chino Hills, Norco and Ontario, Western Municipal Water District and the Inland Empire Utilities Agency. Western Municipal Water district in the Inland Empire will be entitled to 3,534 acre-feet per year of water once phase three of the operation is complete, projected for 2015.

Any discussion of water in California needs to include the Bay Delta Conservation Project. Nearly two-thirds of the state’s population and millions of acres of farmland get their water from the Sacramento-San Joaquin Delta area, known as the Bay Delta. Its pumps provide drinking water to more than 25 million people and water agencies in central and Southern California are dependent on it. Massive pumps at the marsh’s south pull some 4.7 million acre-feet of water each year to supply both the Central Valley Project and the State Water Project. The Bay Delta is 940 square miles and home to over 750 different species of plants and animals. It is also home to many species of fish, including salmon, steelhead, and the Delta smelt.

Nearly two-thirds of the state’s population and millions of acres of farmland get their water from the Sacramento-San Joaquin Delta area, known as the Bay Delta. It provides water to more than 25 million people and a number of water agencies in central and Southern California are dependent on it. Massive pumps at the marsh’s south pull some 4.7 million acre-feet of water each year to supply both the Central Valley Project and the State Water Project. The Bay Delta is 940 square miles and home to over 750 different species of plants and animals. It is also home to many species of fish, including salmon, steelhead, and the Delta smelt. The effect of pumping water from the Bay Delta on these fish has been the subject of long-running litigation, with environmentalists pushing for tighter limits on the volume of water pumped, while farmers and other users arguing that millions of Californians are dependent on water from the Delta. A full discussion of this contentious issue and the Bay Delta Conservation Plan will be the subject of an article in a subsequent issue.