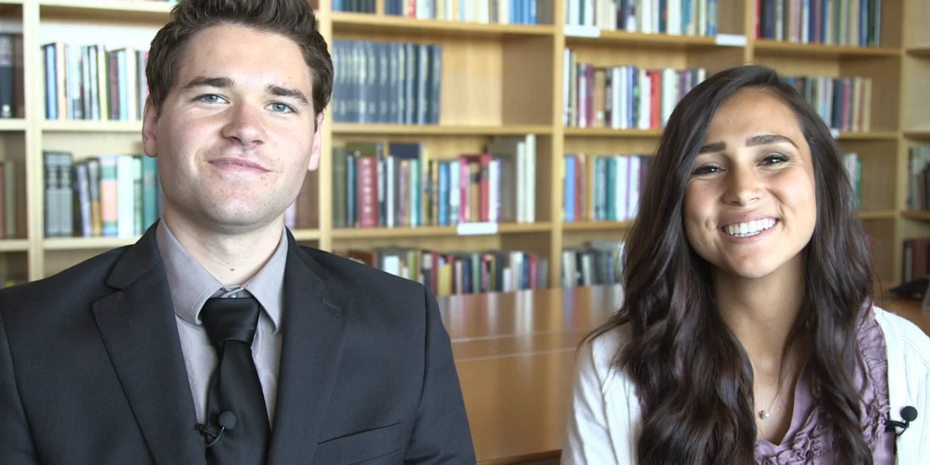 For the past several years, California has had a problem of volatile state revenues. The state’s overreliance on personal income tax, which, according to the State Controller, makes up 67% of state revenue – much of it from high earners – leads to a boom-and-bust cycle. There can be between $5 and $12 billion of variance in state revenue from year to year (between 4.6% and 11.1% of state expenditures for the 2014-2015 fiscal year), which forces the state to cut spending and raise taxes in times of economic trouble. 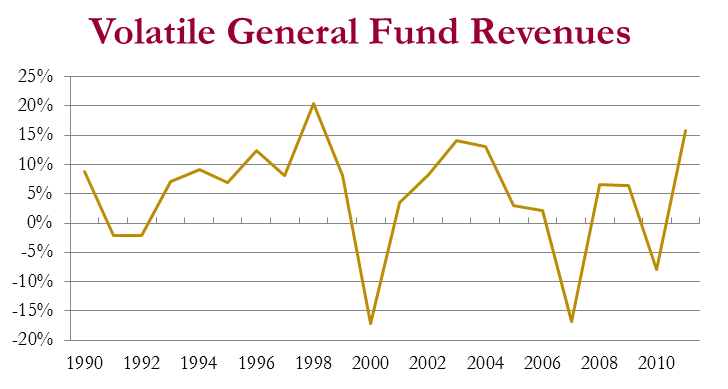 In 2004, California voters passed Proposition 58, which created a new budget reserve, the Budget Stabilization Account (BSA), more commonly known as the rainy day fund. While the basic amount to put into the BSA is set at 3% of General Fund revenues (approximately $3 billion), the Governor and legislature can elect to put less into the account or nothing at all. These amounts go into the BSA until the account reaches a target, currently at $8 billion. The legislature can vote to take money out of the BSA, with no limit on how much they can take at one time. The state added nothing to this account from 2007, when the economic recession began, until this year, when the Governor resumed payments into the BSA.

Currently, school districts have their own reserves. While schools and community colleges have minimum levels of funding guaranteed, overall funding levels frequently vary depending on the overall economic climate. To combat this, state law requires school districts keep minimum reserves (usually ranging between 1% and 5% of annual budget), though many keep reserves much higher.

The state’s debt comes to $300 billion, a number that includes debt for infrastructure as well as pension and retiree health benefits and intergovernmental debt. Of this, $150 billion is owed for pension and retiree health benefits already earned by public employees, while debt to local governments and other state accounts adds another several billion dollars.

Proposed Changes to the Existing Law

Proposition 2 would allocate 1.5% of General Fund revenues to the BSA, and put them into two different categories: debt payments, including unfunded liabilities, and the state reserve. Of the General Fund, the proposition would allocate 0.75% to paying down debt, both liabilities and state debt to local governments or other state accounts. Currently, this is roughly $800 million, and is expected to grow over time. Moreover, whenever state revenue from capital gains taxes are higher than average, the state is required to spend some the additional revenue on paying down state debt. In years with strong capital gains tax revenues, this could mean as much as $2 billion going to pay down state debt. These debt payments will become optional in 15 years. If the Legislature decides not to use these revenues to pay down debt at this point, the money is transferred into the state’s BSA.

Another 0.75% of General Fund revenues are dedicated to the BSA itself. Like the debt payments, additional money goes to the reserve in years with above average capital gains tax revenues. Only in two scenarios can the basic amount be reduced: (1) In the event of a natural disaster, and (2) When there is not enough money to keep the General Fund spending at the highest level of the past three years. In all other scenarios, 0.75% of the General Fund would be deposited into the BSA. Rules for taking money out of the BSA would also change. The state would be limited to taking out no more than half of the money in the BSA in a given year, unless it is the second straight year of a budget emergency. In that event, the state can take out the remainder of the money. The maximum amount of the BSA is $11 billion. Once the state reaches that amount, remaining money will go to build or maintain infrastructure.

In addition to school districts retaining their reserves, the proposition would create a state reserve for schools. The state would deposit money into this reserve in the event of above average capital gains revenue. The state could dip into this account to lessen the impact of budgetary pressures on school districts and community colleges. This changes when the state would spend money on schools, but not necessarily the total amount spent on them. This means that schools would never reach high summits of funding, but would be spared from the deep valleys. The proposition also establishes a maximum for school district reserves of between 3% and 10% of the district’s annual budget. County education officials, however, could exempt school districts from the maximums in special circumstances, including “extraordinary fiscal circumstances.” The maximum reserves are not, unlike the rest of the law, a constitutional amendment. The legislature is able to change this with a simple vote.

An exact dollar amount would be nearly impossible to apply for this proposition. Much of the overall impact will depend on the decisions made by the legislature, governor, school districts, and county education officials, as well as the long-term economic climate. Nevertheless, there are certain events that seem more likely to happen. First, there may be a faster pay down of state debt. In the short term, additional money allocated to state debts will likely crowd out funding for other line items in the budget, such as infrastructure or public programs. In the long-term, this would lead to a lower total cost of the debt, as less money would have to go to interest, which would free up funds. Second, allocations into the state budget reserve depend on the health of the economy, as well as decisions by the legislature or the governor. Third, for school districts, money would be unlikely to enter school reserves unless the economy is very good. Spending on schools would likely not be as high during good economic years, but not as low during bad economic years. For school districts that have a reserve exceeding the proposed maximum, they would have to spend reserves gradually over the next few years, spend it all at once, or receive an exemption from county education officials.

Major Proponents and Donors in Support

Major Opponents and Donors in Opposition

Proponents argue that Proposition 2 will force the government to save money when times are good and pay down debts, while protecting schools from devastating cuts. It will prevent a repeat of the cycle of boom and bust budgeting by stabilizing the state budget. Moreover, there will be an acceleration of state debt payments and the education reserve will prevent future cuts to schools. Proponents also note the wide support Prop 2 has received from credit rating agencies and newspapers across the state.

Opponents argue that the proposition leaves schools enormously vulnerable by allowing them only a few weeks of expenses in reserves. They point out the recent history of education funding – Sacramento has delayed up to $10 billion of payments to schools for the last seven years running – and the risk in giving the state more budget power over the schools. They also discuss how Standard and Poor’s believes this could have neutral or negative credit implications for California schools.

The proposition will mandate that the state pays into the account in order to pay down debts and put away money for use when there is economic trouble. The governor and the legislature will have a much harder time dipping into these reserves, and will be required to deposit money most years. The new reserve for school funding will likely make schools more vulnerable to variances in state funding. In terms of funding levels, schools will have less funding in economically good years, but more money in a bad economy. Overall, this should lead to more consistent budgeting for the state.