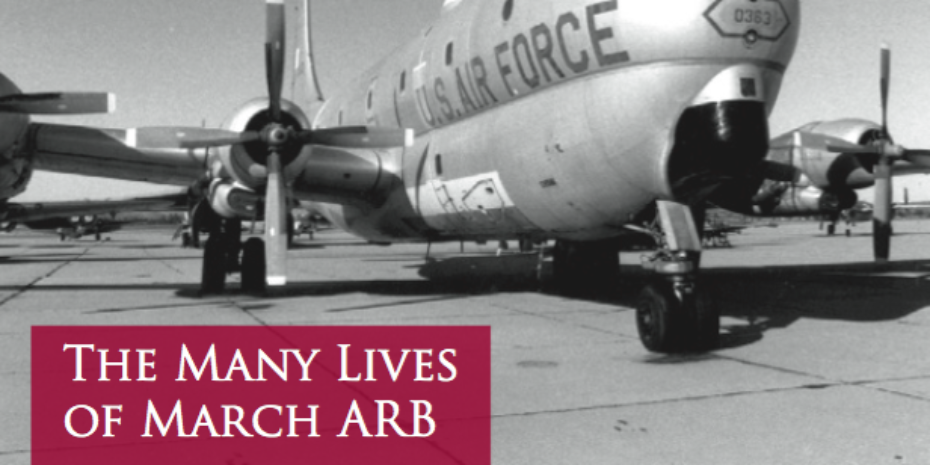 Nestled between the cities of Riverside and Moreno Valley, the March Air Reserve Base (March ARB) is one of the oldest airfields operated by the United States military. It covers some 6,700 acres and its 13,300-foot runway is the longest in California. March ARB was one of thirty-two Air Service training camps established at the onset of World War I. In addition to being home to the Force Reserve Command’s 4th Air Force, headquarters and host to the 452d Air Mobility Wing (the largest air mobility wing of the 4th Air Force), March ARB also includes units from the Army Reserve, Navy Reserve, Marine Corps Reserve, and the California Air National Guard.

March ARB (originally Alessandro Flying Training Field) was one of nearly two dozen training fields activated in 1917. Frank Miller, then owner of the Mission Inn in Riverside, Hiram Johnson, California senator and former governor, and other local leaders persuaded the War Department to accept Alessandro Field as an aviation training camp in February 1918.   The base was renamed March Field one month later in honor of Second Lieutenant Peyton C. March, a young aviator who died in a flying accident, who was also the son of the army chief of staff. The first cadets arrived at the base in late April 1918. Captain William Carruthers, then commander of the 818th Aero Squadron detachment, took over as the field’s first commander. Though operations began from an office in the nearby Mission Inn, within a record 60 days, the area had been transformed with the construction of twelve hangars, six barracks (for 150 men in each), mess halls, a machine shop, post exchange, hospital, supply depot, repair building, officer’s quarters, and a residence for the commanding officer. It covered over 700 acres and could accommodate up to 1,000 personnel. For the rest of World War I, March Field served as a base for an eight-week primary flight training course.

When the war suddenly ended in November 1918, the future of the operational status of March Field was unknown. Ultimately, cadets were allowed to complete their flight training, although no new cadets were assigned to the base, and separate training squadrons were consolidated into a single Flying School detachment. By 1921, however, all operations at the base were scaled down in accordance with sharply reduced military spending and in the spring of 1923, March Field was deactivated as an active duty airfield. A small caretaker unit maintained the facility for administrative reasons and the base remained quiet for a few years.

In 1926, Congress established the nation’s Army Air Corps. As part of the Army’s five-year expansionary plan, funds from the Air Corps Act were appropriated for the reopening of March Field in March 1927. Over the next decade leading into World War II, March Field’s appearance and purpose transformed to that of a permanent military installation. The Air Corps expansion program allowed March Field to usher in a second phase of construction of permanent facilities that reflected the regional topography, climate and history. New construction was in the Spanish Mission architectural design. As the key training and bombardment facility on the West Coast, the base generated considerable publicity, resulting in visits from prominent political figures and Hollywood celebrities alike during the interwar years.

The attack on Pearl Harbor in 1941 triggered a new era of importance for March Field. Throughout World War II, many well-known bombardment groups completed their final training (on B-17 and later B-24 heavy bombers) at March before departing for duty in the Pacific. The base grew to double in area and supported 75,000 troops. A number of smaller airports and airfields, including Buffalo Springs Airport on Catalina Island and Needles Army Airfield in San Bernardino, were set up as sub-bases and auxiliaries used for training during these years as well.

After the war, March Field maintained its strategic significance. When the U.S. Airforce was activated in 1947, March Field became March Air Force Base. March AFB was assigned the new Tactical Air Command (TAC) and was initially allocated to TAC’s 12th Air Force. The first TAC unit, the 1st Fighter group, replaced the wartime 412th Fighter Group. Under the command of Colonel Frank S. Perego, the group’s three squadrons flew America’s first operational jet fighter. The base’s innovative role also led to a number of Air Force reforms. For example, after 412th Fighter Group struggled with a number of technical and practical difficulties, the military prescribed a new organizational standard for all Army Air Forces bases worldwide. In addition, the 1st Fighter Wing was activated as part of the new organization (which became known as the Hobson Plan).

In the following year, the military reassigned the 12th Air Force and March AFB from Tactical Air Command to Continental Air Command (ConAC). Simultaneously, ConAC assumed jurisdiction over both TAC and the Air Defense Command (ADC) in an effort to concentrate all fighter forces deployed within the continental United States to strengthen the air defense. The units assigned to ConAC were dual-trained and expected to revert to their primary strategic or tactical roles after the air defense battle was won.

In July 1950, as tensions with Korea heightened, the 22d Bombardment Group deployed its B-29s to Kadena AB, Okinawa. Later that month, the group flew its first mission in North Korea and by October of that year, it had amassed fifty-seven missions against Korea. In March of 1951, the government also activated the California Air National Guard 106th Bombardment Group to service at March ARB. In the Korean War years, the wing conducted global bombardment training and air refueling operations.

Following the return of the 22d Bombardment Group from Korea, the wing trained for proficiency in global strategic bombardment. In 1954, the 22d Wing flew the longest non-stop mass flight in history: 5,840 miles (9,400 km) from England to California. The 452nd Troop Carrier Wing was activated at March in 1960, establishing the presence of the Air Force Reserve on the base. The wing absorbed a second tanker and bomber squadron in addition to adding the 486th Bombardment Squadron from the 340 Bomb Wing at Bergstrom AFB. The growth made the 22d a “Super” wing.

During the Vietnam War, the military began transferring operations to camps located in Asia. In 1967, the 22d Wing was reduced to a non-tactical organization with all tactical resources and support resources loaned to other SAC organizations. The wing continued to support SAC operations in Southeast Asia through 1975, although few tankers returned to wing control after that.

From 1973 to 1982, the 22d Wing maintained a strategic bombardment alert posture and in 1978 it began taking on conventional warfare missions. The 22d Bombardment Wing was renamed 22d Air Refueling Wing (22d ARW) in 1982, losing its bomber mission. In 1992, a major Air Force reorganization resulted in the disestablishment of the Strategic Air Command and the 22d ARW was assigned to the new Air Mobility Command. By the end of the era, the wing completed mainly humanitarian missions.

In March 1993, the Base Realignment and Closure (BRAC) Commission recommended March AFB for closure or realignment. In August of that year, the 445th Military Airlift Wing transferred to March from the closing Norton AFB in nearby San Bernardino. In addition, the 22d Air Refueling Wing was reassigned without aircraft to Kansas in 1994, thus deactivating the 384th Bomb Wing. The assets of the reassigned 22d ARW were absorbed by the Air Mobility Command’s 722d Air Refueling Wing. When realignment took effect on April 1, 1996 March officially became March Air Reserve Base, bringing to a close 78 years of active duty. Although the base had by then decreased to about one-third its previous size, it still employed over 8,000 full-time employees.

As a result of the downsizing, March ARB transferred land no longer being used to the March Joint Powers Authority, a commission that represents the county and the base’s adjoining cities of Moreno Valley, Perris, and Riverside. The group contracted with March GlobalPort to develop the land on the south of the airfield into an air cargo center. In 2004, the air freight corporation DHL/ABX Air chose the March GlobalPort site as its new Southern California hub. It operated for a few years, but in 2008 DHL shut down the facility due to low profitability. Close to 1,300 acres have been developed into a business park and plans for a 236 acre medical complex are slowly moving forward.

The March ARB currently has 20 units, most of which are part of the 4th Air Force Units and the 452 Units groups. Additionally, 17 brigades and squadrons inhabit the area as tenant units. According to the 2010 United States Census, March ARB had a population of 1,159 with a population density of 97.0 people per square mile. There were a total of 563 households with 16.2% of them having children under the age of 18. These numbers increased from the 2000 census, which reported a total population of 1,016, and 93 families.

Note: An earlier version of this article misstated the 2000 census population.