Proposition 4 would authorize the state to borrow $1.5 billion in bonds for renovations, upgrades, and expansions of certain hospitals that treat children.[1]

All state general obligation bonds require majority voter approval and are primarily used to finance infrastructures, such as roads, schools, and clean water projects. As of June of 2018, California held $74.2 billion in debt from general obligation bonds. Another $29.6 billion has been approved by the voters, but not yet issued.[3]

State law identifies eight private nonprofit hospitals and the children’s programs at the five University of California academic medical center campuses as children’s hospitals.[4] Children’s hospitals focus on treating infants and children with severe illness or injuries or complex chronic health conditions that require specialized care. These hospitals get a majority of their funding from Medi-Cal, the federal-state Medicaid program, which provides healthcare coverage to low-income children in California. The California Children’s Services (CCS) program is a state-local program that pays for specialized treatment and other services for children with complex chronic health conditions. Most children in the CCS program are also enrolled in Medi-Cal.[5] The state must approve hospitals and medical providers to receive payment in the CCS program. In addition to the children’s hospitals specifically identified in state law, hospitals with wings or centers that specialize in treating children are often approved for funding in the CCS program.

The $1.5-billion bond would be allocated to hospitals as follows:[8] 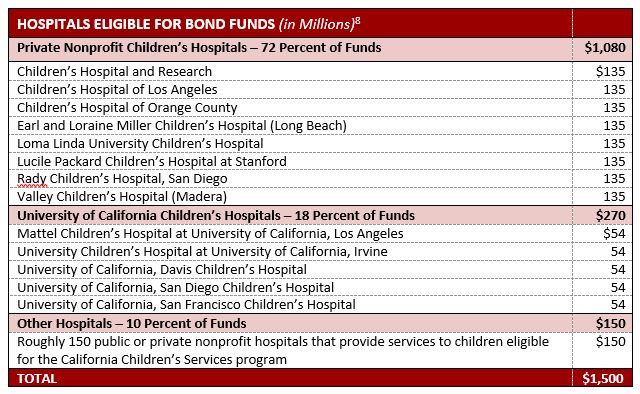 The state’s legislative analyst estimates that Prop. 4 would have the following fiscal consequences:

The California Children’s Hospital Association submitted Proposition 4. The Yes on Children’s Hospitals ballot measure committee raised $10.22 million to support the initiative, with contributions from the following eight children’s hospitals that would receive funds from the measure:

The California Teachers Association supports the initiative using a portion of its ballot measures fund. The measure has also been endorsed by the California Hospital Association board, the Children’s Specialty Care Coalition Board, and Los Angeles County Supervisor Sheila Kuehl.[13]

No committees have been formed to oppose Proposition 4 as of August of 2018, but David Wolfe, a legislative director of the Howard Jarvis Taxpayers Association, has been outspoken against it.[16]

Voting Yes on Prop. 4 authorizes the state to issue $1.5 billion in bonds for constructing, equipping, renovating, and expanding children’s hospitals in California.

Voting No on Prop. 4 does not authorize the state to issue $1.5 billion in bonds for children’s hospitals in California.[19]

For more information on Proposition 4, visit: