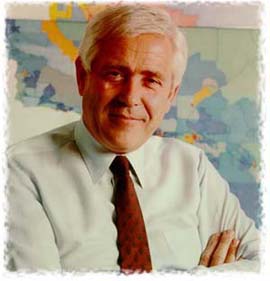 Born in England and educated in Oxford, Dr. Heslop came to this country after service in the Royal Air Force.  A political scientist, he taught at the University of Texas and Texas A & M, as well as Claremont McKenna College.  He is author and editor of books and articles on a variety of subjects, mainly in the area of electoral politics.  In 1974 he was named the Don and Edessa Rose Professor of Politics at Claremont McKenna College.  Dr. Heslop served as the Director of the Rose Institute of State and Local Government, a research center at Claremont McKenna College until 2000. He also served as Dean of the Faculty and Executive Vice President of the College.

Dr. Heslop also has extensive experience in practical politics.  A former Congressional Fellow and legislative aide in the U.S. House and Senate, he was Executive Director of the California Republican Party and Executive Director of the Cal Plan.  He has also served as the senior consultant to the Republican leadership in the California Legislature and as a consultant to Presidential, Statewide, Congressional and State Legislative campaigns.  He was consultant to Governor Reagan on reapportionment.

In 1985, President Ronald Reagan named Dr. Heslop to chair the National Council on Education Research and Improvement. He was appointed by Governor Pete Wilson to the California Constitutional Revision Commission.