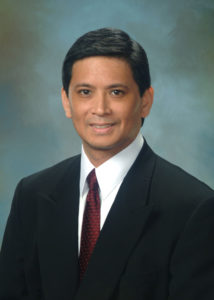 Angelo Ancheta is a member and the current chair of the California Citizens Redistricting Commission.  A lawyer and an academic, Ancheta was a professor at the Santa Clara University School of Law from 2005 to 2014 and has also taught at the Harvard Law School, the New York University School of Law, and the UCLA School of Law.  From 2000 to 2004, he was the Director of Legal and Advocacy Programs for The Civil Rights Project at Harvard University. He has written numerous journal articles and book chapters focusing on voting rights, race-conscious policies, and the use of scientific evidence in constitutional litigation, and he is the author of the books “Race, Rights, and the Asian American Experience” and “Scientific Evidence and Equal Protection of the Law.” Ancheta has also worked on appellate litigation and has written amicus curiae briefs in numerous U.S. Supreme Court appeals involving race-conscious policies in education. Prior to his academic work, Ancheta was a legal services lawyer and nonprofit executive director in both Northern and Southern California, where he focused on immigration and civil rights law. He received his bachelor’s and law degrees from UCLA and holds master’s degrees from Harvard University and Claremont Graduate University.