On Thursday, October 17, 2013 at the Marian Miner Cook Athenaeum, the Rose Institute for State and Local Government commemorated its 40th anniversary. The celebration was scheduled to coincide with the institute’s semi-annual Board of Governors’ meeting. The day started with CMC President Hiram Chodosh addressing students and the board members at a luncheon, followed by the board’s business meeting, student presentations, and the celebratory dinner.

President Chodosh welcomed the 103 guests and Rose Institute Board Chairman Darryl Wold ’63 served as the master of ceremonies. The Rose honored its past directors, Dr. D. Alan Heslop, Dr. Ralph A. Rossum, and retired associate director, Dr. Florence P. Adams, at the dinner. Dr. Heslop sent his greetings via video, lauding the institute’s progress since its founding and recalling more memorable moments in Rose history. Dr. Rossum and Dr. Adams also offered reflections of their many years at the institute. Former Research Assistants Ed Heidig ’75, Sean Elsbernd ’97, and Jacinth Sohi ’11 offered a student perspective, highlighting memorable moments and valuable skills gained from their time at the Rose. Mr. Elsbernd read a letter of good wishes from former Speaker of the California Assembly, Willie Brown. Claremont Mayor Opanyi Nasiali presented at Certificate of Recognition to the Rose Institute, for its dedicated service to the community over the last 40 years.

Henry Olsen, III ‘83, a Senior Fellow at the Ethics and Public Policy Center (EPPC) and well-known Rose alumnus, delivered the evening’s keynote address. Olsen made history at the Rose for his lead role in helping uncover the Democratic leadership’s gerrymandered maps in the 1980 California redistricting cycle. His talk centered on the modern demographic challenges facing the two major parties, and the effects of the rapidly increasing minority electorate. Specifically, Olsen cited the high cost to the Republican Party in the 2008 and 2012 elections as a result of their inability to appeal to these voters. He concluded by commenting on the fluidity of American politics, and declaring that hope for both parties lies in their ability to recognize this change and adapt to it. 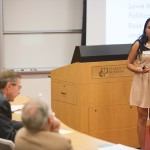 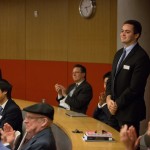 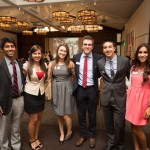 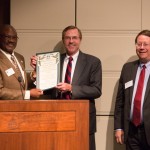