It is with great sadness that the Rose Institute announces the passing of Dave Huntoon. A Fellow since 1998, many students worked with him on a wide variety of projects, including the Kosmont Cost of Doing Business Survey, Contract Cities, and the Inland Empire Outlook. More importantly, he was known as a fine man, a true gentleman, and a great friend to the Rose Institute and CMC, where he graduated in 1965.

The Rose Institute Board of Governors has released a Resolution of Appreciation in honor of Dave, which can be read here.

He will be deeply missed. 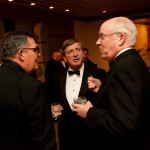 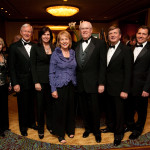 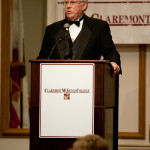 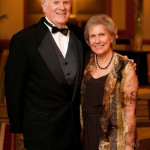 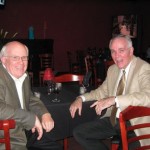 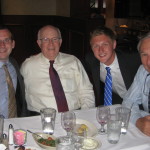 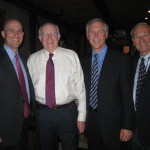 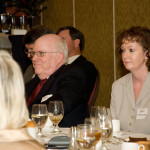 Notes to the family may be sent in care of the Rose Institute, 850 Columbia Avenue, Claremont, CA 91711 or by email care of roseinstitute@cmc.edu.

Reflections on Dave Huntoon from his friends and colleagues:

“Dave Huntoon was a fine man, a true gentleman, a great friend of the Rose Institute and Claremont McKenna College, and a valued mentor to students and advisor to the only three Directors the Institute has ever had. Dave’s character combined a reserved strength with good humor, a demeanor he never lost in his long battle with cancer. It never ceased to amaze me how much Dave knew about Southern California government and politics, or how many people Dave knew. In his many dealings with government, business, and tribal authorities, Dave never failed to represent the Rose Institute and CMC with class and enthusiasm. He was a large man, and he leaves a large hole — not just in his work, but in the lives of those of us who were privileged to consider him our friend. He will be missed.” – Andrew Busch

“I have known Dave since 1998. He was a man of honor and the highest integrity. He always represented CMC and Rose in a professional manner and I considered him and friend and mentor. Dave served his nation in the U.S Army, obtaining the rank of Captain during the Vietnam War. He was also patriot and kind man. He loved his children very much and was proud of each of them and their accomplishments. My wife Brenda and I will miss Dave, his humor, guidance, and friendship.”  – Tom Freeman

“I find it difficult to fully express the depth of my sadness at the loss of my friend and mentor Dave Huntoon. I met Dave in 2006, in the summer after my first year of doctoral study. What struck me about him then, and which continued to strike me for the whole time that I had the privilege of knowing him, was the seriousness with which he approached his work. Dave was a man of opportunity; he was constantly on the lookout for opportunities, not only for himself, but for others as well. His tireless efforts to match opportunity to talent undoubtedly contributed significantly to the future success of so many students who have passed through the Rose Institute. As a man of opportunity, however, Dave was also an educator. Dave’s classroom was the real-world of business, non-profits, and state, local, and tribal governments. The education he provided complemented and completed the education we received in the academy. He offered us the opportunity to grow intellectually, to cultivate new capabilities, and to hone our skills. He taught the important lesson that there is a necessary connection between responsibility and accountability, that there cannot be not one without the other. He demonstrated through his actions what it meant to be, not only a good manager, but a noble man and good human being. In Dave Huntoon, the Rose Institute and Claremont McKenna College had an irreplaceable champion. I know I speak for many when I say, I will forever be grateful for the opportunities he made available to me and that he will be sorely missed. Requiescat in pace, my friend.” – Murray S. Y. Bessette

“Dave was a friend and mentor to many, and a loyal son of Claremont McKenna College. He consistently went out of his way to help me and many friends of mine, and his kindness, humor, patience, and love of his alma mater and its community was inspiring. I will never forget our lunch talks, and his constant question when he’d check in on various projects, which I’ve long since adopted from him: “Are we winning?” I learned much from him that I couldn’t have learned in a classroom. May he rest in peace, and sincere condolences to his family and all those who knew him.” – Matthew Peterson

“Dave, whom I have known for more than 15 years, was a reserved, but caring man, who was quick in mind, but slow to anger. Though our initial partnership was not easy, we built up a working relationship that required trust, and I thank him for the privilege of letting me earn that trust. It was an honor to work closely with a man with good moral values and a deep sense of loyalty to his friends, his alma mater, but most importantly his family. For everything, there is a season, and a time for everything under heaven, so for now…farewell.” – Marionette Moore

“Mr. Huntoon’s contributions to the Rose Institute, Claremont McKenna and the many students he mentored are immeasurable. From day one, he set the bar high, and working to earn his respect over the next two years was one of my greatest drivers. He was a role model – a man of character – and I am grateful to have had the opportunity to learn from him. My deepest condolences to his family.” – Brian Eckhardt

“Mr. Huntoon was an incredibly smart, kind, and generous man to all those who knew him. I greatly enjoyed learning from him during my time at the Rose Institute, where he truly taught me about the importance of state and local government (I currently do state and local government affairs professionally). But even more importantly, Mr. Huntoon was always there as someone you could talk to and who would listen to you, no matter when. He always had thoughtful comments and advice for any situation that I brought to him during my four years at CMC. We had some great conversations around the Rose Institute office, at Board of Governors’ dinners, and during Rose Institute trips which I will miss greatly. His generosity was always remarkable. A couple of months before I graduated CMC when I had not yet secured a job, he asked me how the job search was going and I told him that I was still looking but had not yet secured a job. Without me even asking him, Mr. Huntoon offered to set up a meeting with one of his friends on Capitol Hill to discuss openings in their Congressional office. This is but one of the many examples of Mr. Huntoon going above and beyond in his kindness and generosity towards his students and friends. He was a great friend to the Rose Institute, CMC, and countless people in the community. He will be greatly missed.” – Mike Whatley

“Dave Huntoon was a dear friend and mentor and I am greatly saddened at his passing. For nearly three years, it was my privilege to work for Dave at the Rose Institute, handling a variety of different projects. One week it would be a city services survey for the City of Monrovia, the next week a report for the Pechanga Band of Mission Indians, the week after that hotel occupancy and crop yields for the Coachella Valley. Dave threw me into the deep end of local government policy. He always wanted the best out of you but Dave also wanted to help you learn and improve. He was demanding but he when you earned his trust, you knew it, and Dave would express that confidence in many ways, large and small. Time and again I watched young students at the Rose come into Dave’s office with questions about their majors, their internships, their careers and Dave would patiently offer his counsel and gentle encouragement. As I got to know him better, I realized how incredibly funny Dave was. I once had to deal with an extremely irritable and prickly partner on one of our projects. I was fed up and upset with the quality of work we were seeing. Dave came in the office, asked for an update, and I tried to professionally explain the difficulties were encountering and the poor performance of this individual, which Dave listened to without out comment, nodding his head once or twice. At the end, I said “I just don’t understand what’s this guy’s problem.” Dave replied: “He’s an idiot, Brad. That’s his problem.” I am honored to have known Dave Huntoon so well, to have worked by his side, and to have counted Dave as a friend. My deepest condolences to his family for their loss.” – Brad Jensen