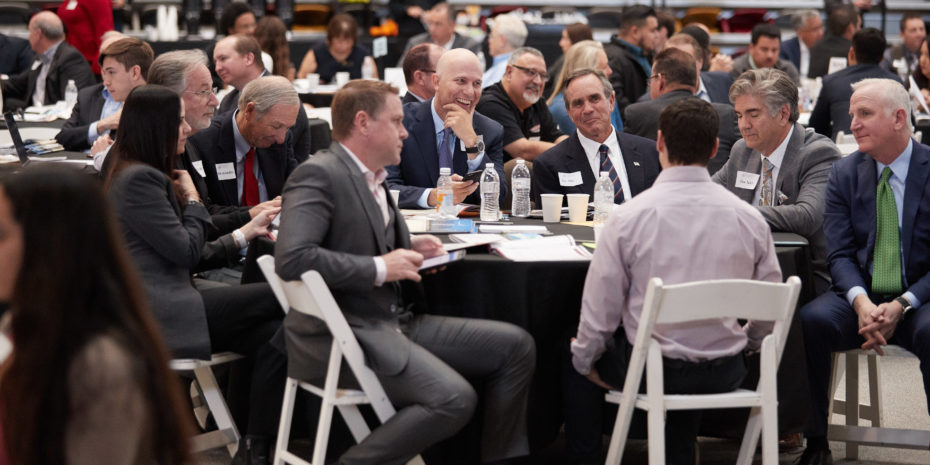 The Inland Empire Vision 2018 conference featured an interactive survey utilizing the presentation software Sli.do. Conference attendees could respond to questions posed on the presentation screen, before discussing the results of these polls with other attendees at their table. The results not only helped to show how the participants felt about the questions more generally, but also gave them the opportunity to respond with comments. Ultimately, while unscientific, the Sli.do poll give an insiders-view into how the business and policy communities in the Inland Empire feel about the region’s future.

Interestingly, according to the poll, the vast majority of conference attendees from the IE believed the outlook of the region was positive. Of the 141 respondents, three in five said that the future of the Inland Empire would be somewhat positive, while another one-third said very positive. Only 4% said that they believed the outlook would be somewhat negative. The comments by the conference participants paint a nuanced picture of this optimism. Some people pointed to the fact that “air traffic [is] increasing” while the “quality of life [is] better than in LA.” Other respondents pointed to the “import/export performance” of the Inland empire gives it a “bright future.” However, others noted that there were still many unresolved issues, especially in relation to things like “educational attainment” as there is a “lack of a comprehensive four-year college in the Coachella Valley.” Overall, the responses were quite positive, with most concluding that “job quality, cheap housing, and positivity towards business” will create the IE positive future.

Do you believe the future of the Inland Empire will be:

Next, the attendees were asked “what are the key challenges the private sector faces?” Respondents were given the opportunity to check all the options they believed applied. About two-thirds said that “hiring and keeping a qualified workforce” was a key challenge, while three-fifths said that the “cost of taxes and regulations” was a main impediment. One quarter said that the “cost or availability of real estate” was a limiting factor, while over a third believed that “transportation/commuting” was a key impediment. When asked to distill their responses into comments, some respondents explained how “there needs to be more of an alignment between what our education system offers and what employers and industries desire,” while others held that “specific trainings like trade school can be more important than college degrees.” In contrast, other respondents believed that “just ‘more’ education won’t solve the problem because of degree inflation—it’s too general a solution.” Instead, they explained that “the cost of taxes and regulation is really burdensome, people are just moving just across the border into Arizona and Nevada … just to save those costs.” Other attendees pointed to the fact that “hiring and keeping a qualified workforce is by far the worst problem” but that the “high cost leads to difficulty in keeping a high qualified workforce here.”

What are the key challenges the private sector faces?

The final question asked respondents “what are the key challenges that policymakers should focus on?” Attendees the opportunity to identify their top two options in this question. Three in four identified the “cost of doing business (taxes, regulations, fees) and three in five believed that education was the key challenge where policymakers focus should be placed. Interestingly, only 16% responded that water or transportation were the key challenges, and half that many said that law enforcement or land use was where the focus should be. One respondent pointed to the fact that “government regulations are difficult to overcome without moving to states with lower taxes/fees. Education requires much larger and more egalitarian investment to prevent parents from moving to other areas with better public schools.” Another attendee pointed to the fact that “infrastructure issues cause problems with our water and transportation that need to be addressed. There is a huge potential to increase the standard of living in the Inland Empire.” Overall, the majority of comments to this question were in relation to education and regulations.

What are the key challenges that policymakers should focus on?

If you would like to learn more about the questions, results, or the software used, just click this link!