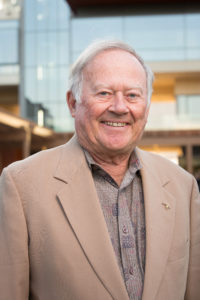 Ray Remy (CMC’59) was awarded the 2012 Rose Institute Award for Excellence in Public Service at a reception held at David and Katherin Mgrublian’s home in Pasadena on Saturday, March 25th. Dinner conversation was shared between Remy’s friends, family, co-workers, and affiliates of the Rose Institute. After the last chocolate mousse was served, Dr. Andrew Busch, Director of the Rose Institute, introduced the speakers for the evening. David Mgrublian ’82, one of Ray Remy’s close acquaintances, and fellow board members, talked about the commonplace yet unrecognized aspects of Remy’s contributions to Southern California, such as water regulation and road construction in Southern California.

After Mgrublian’s warm and personal tribute, Pamela Gann, the President of Claremont McKenna College, shared her positive experiences working with Remy on Claremont McKenna’s Board of Trustees and then offered sincere gratitude on behalf of CMC. Darryl Wold ’63, the Chairman of the Board of Governor’s noted how the Rose Institute directly benefited from Remy’s leadership on the Board of Governor’s; yet he also acknowledged how Remy’s influence extends beyond the Claremont Colleges. Remy has served as a Deputy Mayor of the City of Los Angeles, the President of the Los Angeles Area Chamber of Commerce, and the Director of the Employment Development Office. After mentioning just a few of Remy’s positions, Wold then presented the award and allowed Remy to offer an acceptance speech after the proud applause died down.

In accordance with Remy’s selfless spirit, he dedicated the length of his acceptance speech to recognizing other public servants seated around the large room. Remy shared his impression of other powerful leaders and then stressed the importance of exciting today’s youth to pursue roles in local government. At the end of his moving speech, Remy was met with a standing ovation.

In honor of Remy’s dedication to higher education and service to local and state government, the Rose Institute has created the Ray Remy Student Research Fund to support research projects at the institute.

Ray Remy is known for his years of service in government and the private sector, serving as deputy mayor of the City of Los Angeles, and chief of staff for former mayor Tom Bradley, as director of the State Employment Development Department, as a board member of the Metropolitan Transportation Authority, as a member of the State’s Fair Political Practices Commission, as executive director of the Southern California Association of Governments, and as president of the Los Angeles Area Chamber of Commerce. He also served on the boards of numerous nonprofit organizations and academic institutions and has received a commensurate number of awards for his service in those capacities.