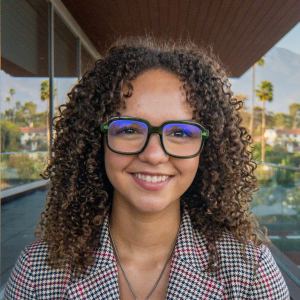 Jada Cook is from Porter Ranch, California. She intends to major in Philosophy, Politics, and Economics at Claremont McKenna College. Her interest in state and local government developed through efforts she led in her high school, her community, and across the U.S. to increase voter registration and voter education, as part of the national, nonpartisan initiative When We All Vote. She also has a passion for research in the area of healthcare reform. At the Rose, Jada looks forward to honing her writing skills, utilizing new research programs and techniques, and engaging in civil discourse on a variety of issues related to state and local government. Jada is a dancer, who has performed and competed in many styles, including contemporary, jazz, pom, and hip-hop. 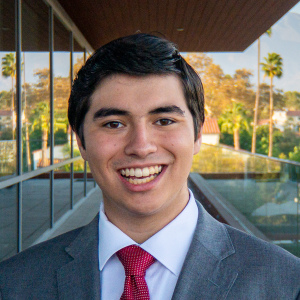 Richard is from Los Angeles, California, and is pursuing a major in History. He first developed his interest in government over many car rides home with his mom playing talk radio. In high school, Richard worked as a campaign intern for L.A. City Councilman John Lee’s first campaign. Following that, he worked as campaign staff for Congressman Mike Garcia’s campaigns and did a stint as an intern in Garcia’s congressional field office. At the Rose, he is interested in researching gun policy, judicial elections, and district competitiveness. In his free time, Richard enjoys hiking, shooting, painting, and trying to keep up with campaigning. 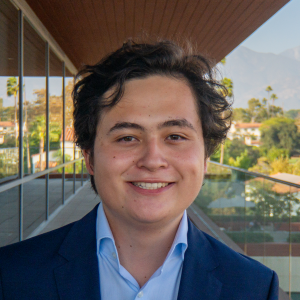 Cary is from Greenwich, Connecticut, and is majoring in Political Studies, with an emphasis on International Politics, at Pitzer College. During his high school years in San Diego, California, he became politically active by working for congressional and presidential campaigns. This past summer, Cary served as an intern at the First Selectman’s Office of the Town of Greenwich, where he was tasked with developing an electric vehicle charging policy, exposing him to the inner workings of policy-making at the local level. During the Summer of 2021, Cary interned at the New Jersey Department of Homeland Security where he conducted a trend analysis project focusing on extremist groups and affiliations. On campus, he has assisted Professor Busch with research concerning the 1981 air traffic controllers’ strike and the subsequent Reagan administration response. He is interested in studying homeland security policy at the state level and getting to know all the great people at the Rose. Outside of academics, Cary enjoys playing tennis, re-watching presidential debates, and catching up on political dramas. 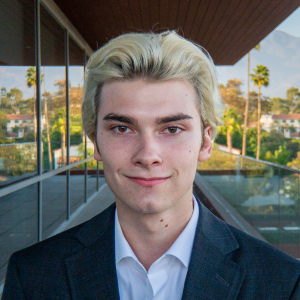 Jack is from Park City, Utah, and is majoring in Public Policy. His interest in state and local policy began when he got the opportunity to lobby for healthcare coverage expansions with state legislators. He also enjoyed analyzing policy perspectives and competing at tournaments as the captain of his high school’s speech and debate team. At the Rose, Jack is looking forward to conducting research related to crime and justice. On campus, he is a member of CMC Advocates. In his free time, Jack likes to ski and create digital art. Sam is an Economics and International Relations major who was born and raised in Boulder, Colorado. He became interested in state and local government through Speech and Debate, as well as subsequent internships with a state legislator and the Governor of Colorado. Now, he is interested in learning about the relationship between institutional reforms and policy outcomes and hopes to hone his quantitative and qualitative research skills at the Rose. He loves hiking, reading excessively long fantasy books, and traveling to explore nature in different states and countries. In addition to him working at the Rose, Sam competes for CMC’s Model United Nations team, conducts research for the CMC Policy Lab and American Enterprise Institute on the impact of changes in vote access on voter turnout, and works as a program assistant at the Keck Center for International and Strategic Studies. 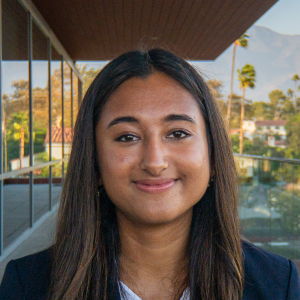 Sanskriti is from Stamford, Connecticut, and is pursuing a dual major in Government and History. Sanskriti developed an interest in local government by working with local legislators to draft an allergy bill and working on local campaigns, where she learned directly about housing and education policy. At the Rose, Sanskriti hopes to develop her quantitative research skills and learn more about the Inland Empire Region. In her free time, Sanskriti enjoys spending time outdoors and with her family. 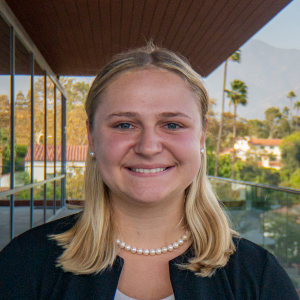 Katherine is from Newtown Square, Pennsylvania, and is studying Government and Economics. She became interested in politics when she ran voter registration initiatives in her high school and community. Katherine is passionate about varying government issues but finds interest in drug policy and voter initiatives. Outside of the Rose, Katherine is on the Model United Nations team, where she serves as the 2022 MckennaMUN secretary general. She also works as President of GenUp Claremont, a 5C club, and traveled as an Appel Fellow this summer. You will probably find Katherine studying around campus or solving the daily crossword puzzle in her free time. 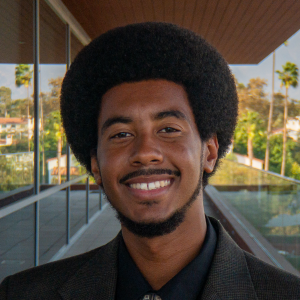 Chad McElroy is a freshman at CMC studying Government. Hailing from Concord, California, Chad pursued his passion for public service as an Election Poll worker in his home county of Contra Costa, worked with the staff of his local House Representative Mark DeSaulnier, and attended CA Boys State 2021. Chad hopes to further investigate topics such as firearms legislation and the voter dynamics at the Rose. In his free time, Chad enjoys riding his bike, going to baseball games, (re)watching Star Wars, and keeping up with everything related to NASA and space exploration. 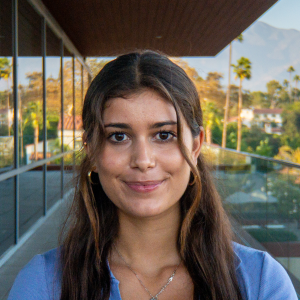 Jemma is from Summit, New Jersey, and is a prospective PPE and Economics dual major. She first developed an interest in public policy in high school while working on Tom Malinowski’s congressional campaign, and cultivated this passion in the summer of 2022 through her work as a research assistant at the CMC Policy Lab. Her summer fellowship with the Keck Center for International Relations, during which she researched the effect of fast fashion on the labor forces of low-income countries, further developed her interest in political economy. At the Rose, Jemma hopes to research the equity impacts of California’s criminal justice system and housing policies. 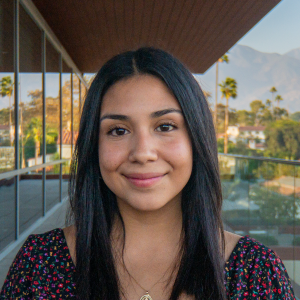 Andrea Santillan is from Lee Vining, California a small town in the Eastern Sierra. She plans on majoring in Government with a sequence in Chicano/Latinx studies. Andrea got interested in state and local government after lobbying at the Capital for the Citizens Climate Lobby and doing some field work in Claremont and Pomona for her Government class. She looks forward to having a closer look at the many processes and challenges the state faces during the electoral process, and learning how to conduct thorough research using data extraction & analysis techniques. Andrea really enjoys solving puzzles with her brothers and walking around her hometown during sunset to get good pictures of the orange sky. 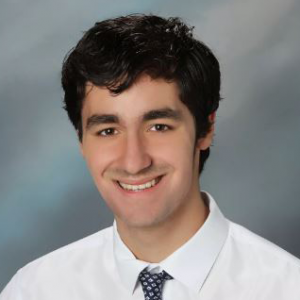 Ryan Shakiba is a freshman at Claremont McKenna College who is planning on majoring in both Data Science and Philosophy, Politics, and Economics (PPE). He has been interested in politics and government since he was young, being fascinated with the history of the executive branch of the national government, and as time went on, he also found the structure of federalism in the United States to be intriguing, which led him to take in interest in the features of local government as well, which is what led him to want to join the Rose Institute. He is most excited to learn about how state and local governments affect economic development and is looking forward to doing research in those areas. Being from San Diego, California, he loves the ocean and hiking, as well as tennis and running, but his favorite thing to do is to learn. 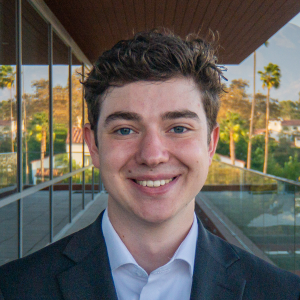 Noah is from Los Angeles, California, and is majoring in Economics and Government. His interest in local and state government arose through discussions with peers and teachers and is centered around citizen-driven public policy. Previously, Noah worked at Westhook Capital, an L.A based private equity firm, and during the summer of ’22 interned for the Milken Institute, an economic think tank in D.C. At CMC, Noah is currently a first-year guide (FYG) and is working as a research assistant for Professor Fortner. At the Rose, he is excited to research economic and criminal-justice public policy. In his free time, you can find Noah going to CMS Trivia every Thursday, skiing, cooking, or watching the Dodgers. 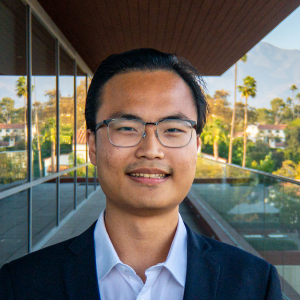 Joseph is from Elkhorn, Nebraska, and is pursuing a dual major in Public Policy and Economics. He got his start in the policy realm through nonprofits and advocacy in sustainability. From the nonprofit sector, Joseph quickly moved into the public financing of sustainable infrastructure at the Nebraska State Treasury, California State Treasurer’s Office, and the North American Development Bank. His water policy interest drew him to the Rose Institute, where he hopes to explore the multi-level issue of intelligent water management policy. Outside the Rose Institute, Joseph is an Economic Journalist for the Lowe Institute, looking at manufacturing reshoring trends, and a Research Assistant at the Keck Center for International and Strategic Studies, analyzing the effect of foreign aid and democratization. Sometimes, Joseph is spotted giving tours to prospective CMC students. In his free time, Joseph loves to read books that challenge his beliefs, hike with friends, and watch the sunsets.