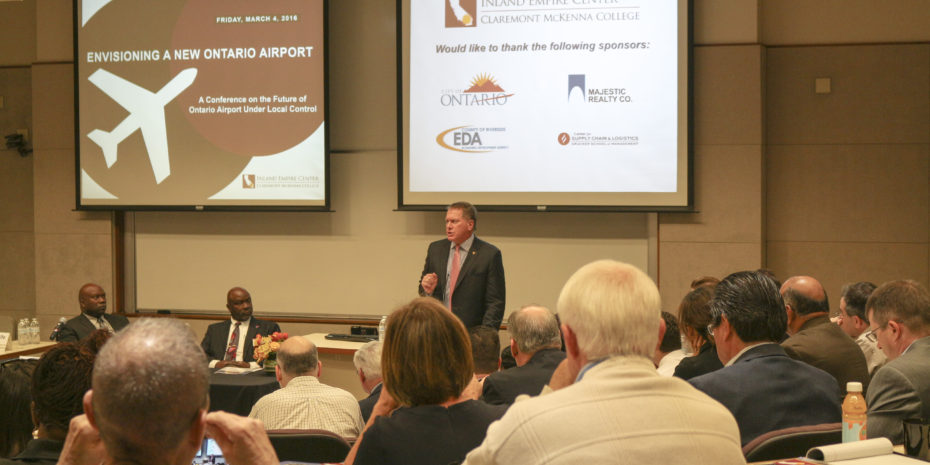 Elected officials, business leaders, journalists, and students from throughout the Inland Empire were in attendance on Friday to learn about the future of airport after decades of ownership and management by Los Angeles. In his address, Fredericks told the attendees that he will prioritize increasing air service and customer satisfaction. Fredericks, working with the OIAA board, will develop a master plan for ONT to grow passenger numbers, lower operating expenses, and increase non-aviation revenue.

Wapner, the leader of the campaign for local control, noted that the airport is seeing a rebound in passenger traffic (with international traffic up 60 percent in 2015). Ontario Airport Station Leader for Southwest Airlines, Bruce Atlas, said that Southwest plans to expand into 50 new cities in the next two years. The expansion will attract more customers and will help, Atlas said, ONT reach 7.2 million annual passengers again. David Bonner, Southwest Gateway Manager for United Parcel Service (UPS), talked about the large UPS operation at ONT. Cargo is an equally important component for the success of the airport. Indeed strong cargo volume was instrumental in keeping ONT going through the downturn.

Fredericks and Wapner both stressed that changes will not happen overnight. Nonetheless, the leaders of OIAA maintain that ONT can be transformed from an undervalued airport into a thriving transportation center.

Ron Loveridge chaired a panel on economic development. He was joined by Jan Brueckner of UC Irvine, who stressed the importance of ONT in the local economy and noted the benefits of development for the region. Steve Lambert of the 20/20 Network and Ontario Airport Alliance spoke on the mutual benefit of the airport to the local business community. Mike Wolfe of Lee and Associates spoke about new developments near the airport.

OIAA, which was formed in 2012, will gain control of ONT after the FAA approves the transfer, anticipated to be later this year.

← Senator Hertzberg Speaks at the CMC Athenaeum
The Future of the Republican Party in California: Cynthia Bryant at the Athenaeum →